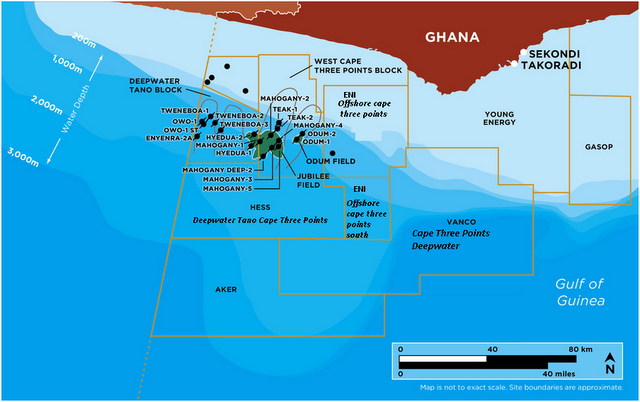 In addition to there offshore and onshore projects, these countries as many others on the West Africa are developing local regulations to favor the local content.

After number of adjustments Nigeria is currently well in progress regarding its local content policy with the first world-class floating, production, storage and offloading (FPSO) vessel to be built by  Samsung Heavy Industries (Samsung) in Nigeria.

Ghana is still progressing along the learning curve of this sensitive topic balancing between the political intention to maximize the local content and the pragmatism to speed up the oil and gas exploration and production activities.

Modec and SBM in competitive FEED for Tullow TEN

The UK-based Tullow Oil plc (Tullow) and its partners Kosmos Energy (Kosmos) fromUSA, Anadarko Petroleum (Anadarko) from USA, Sabre Oil and Gas (Sabre) fromUSA, and the local Ghana National Petroleum Corporation (GNPC) are approaching the time for decision on the design contest between Modec and SBM for the TEN FPSO project offshore Ghana.

In September 2012, the Italian national oil company Eni and its partners, Vitol from The Netherlands and the Ghana National Petroleum Corporation (GNPC), made the first oil discovery in the Offshore Cape Three Point (OCPT) block in the Tano Basin about 50 kilometers offshore Ghana.

The local junior company Lekoil Ltd (Lekoil) signed a Sales and Purchase Agreement (SPA) with Panoro Energy (Panoro) from Norway to acquire its stake of the Aje project in the Oil Mining Lease 113 (OML 113).

Samsung to build the world largest FPSO in Nigeria

In June 2013, Samsung Heavy Industries Upstream Nigeria converted a letter of appointment (LOA) into firm signed contract with Total Upstream Petroleum Nigeria (TUPNI) for the construction of the world ever largest floating, production, storage and offloading (FPSO) vessel in Nigeria.

The Nigerian billionaire Aliko Dangote announced its project to build a greenfield new refinery in Nigeria in order to compensate current imports.

Nigeria is the largest crude oil producer in Africa …