Samsung to build the world largest FPSO in Nigeria

In June 2013, Samsung Heavy Industries Upstream Nigeria converted a letter of appointment (LOA) into firm signed contract with Total Upstream Petroleum Nigeria (TUPNI) for the construction of the world ever largest floating, production, storage and offloading (FPSO) vessel in Nigeria.

In this contract, SHI will act as the subcontractor of Samsung Heavy Industries Upstream Nigeria.

With $3 billion capital expenditure, this FPSO awarded by Total and the local Nigeria National Petroleum Corporation (NNPC) to Samsung for Egina is still increasing in size since March earlier this year.

With the same length of 330 meters and the same width of 61 meters this final version of Egina FPSO will exceed the previous one with:

This last contracted FPSO is also breaking another record as the world ever largest offshore plant.

Until now Samsung was already the owner of the previous record with the world biggest offshore Central Processing Facility ordered in January 2012 for $2.7 billion by the Japanese company INPEX.

This INPEX Central Processing Facility had been enlisted at that time by the Guiness Book of World Records as the world largest offshore plant.

With this new Egina FPSO for Total Upstream Petroleum Nigeria (TUPNI), Samsung will keep his record.

With its shipyard close to Lagos, Samsung had made a significant effort on the local content to win the project in addition to submit the lowest bid.

In Egina FPSO, 12,000 t to 15,000 t of the topsides, representing approximately 40% of these topsides, should be fabricated in Nigeria and contribute to the local content requirements.

In this FPSO, 43% of the vessel total cost ($1.28 billion) should be provided locally by Samsung Heavy Industries Upstream Nigeria. 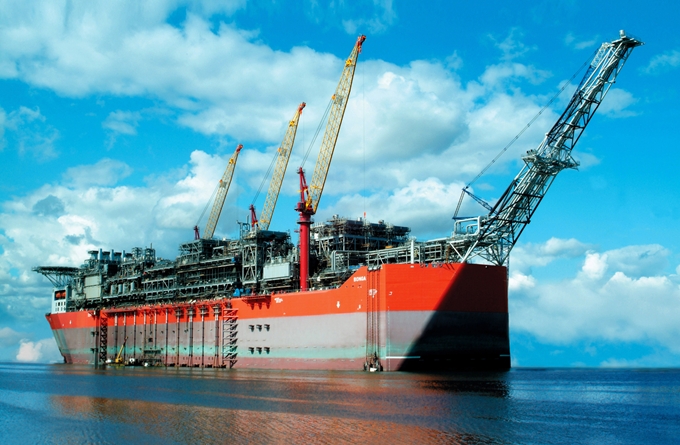 For this Egina FPSO, Samsung signed the contract on a lump sum turn key basis.

With this form of contract, Samsung has a strong pressure on the costs, but benefits from a certain autonomy in the limits of the regulations and project specifications to optimize his manufacturing process and reduce costs.

For this Egina FPSO, Samsung contract includes the engineering, procurement, construction (EPC) and the transportation on site as well as the pilot operations.

In this context, the regulation on the local content is giving contractors additional constraints but also the opportunity to reduce the costs if well anticipated.

For Egina, Samsung and Total prepared over the years a comprehensive program to train young Nigerian workers in South Korea to the different skills required for the design and construction of such a vessel such as for example: sandblasting, welding, integrity inspection.

These training programs were developed in line with and rewarded by American standards certifications.

In Nigeria, Samsung deployed plans with the Government to offer the opportunity of these training programs to all categories of population, including the Niger Delta indigenes.

From these experiences in Nigeria with major companies like Total, Samsung is building up its FPSO market leadership on its local content capabilities.