More than 40% of the oil and gas production is coming from the famous Tengiz and Karagchaganak. 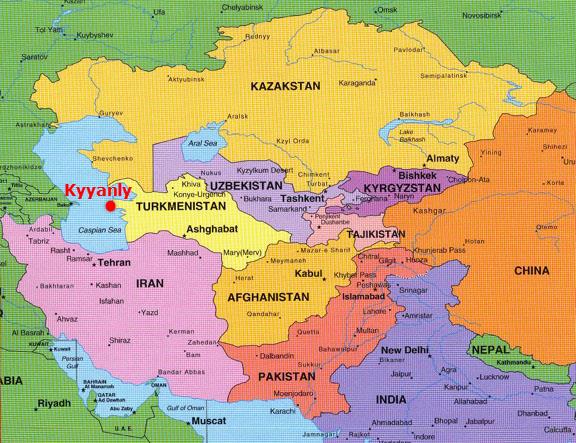 With the support of the international oil companies (IOC) Chevron, ExxonMobil and Lukoil, the wholly state-owned company KazMunaiGas (KMG) undertook the full field development of Tengiz.

On its side Turkmenistan holds the sixth world proven reserves of natural gas with 265 trillion cubic feet (tcf) declared on January 2014.

In this context, both countries are struggling to develop their transportation infrastructures to export their oil and gas resources but are also investing downstream to develop their refining and petrochemicals capacities.

Chaired by ex BP CEO, Tony Hayward, CompactGTL Limited (CompactGTL) signed a memorandum of co-operation with the Ministry of Oil and Gas in Kazakhstan to build in this country the first small-scale gas-to-liquid (GTL) facility in the world. With this project Kazakhstan is willing to monetize the associated gas released by its upstream sector from the oil and gas processing facilities.

The California-based international oil company (IOC) Chevron Corporation (Chevron)and its partners, the Kazakh national oil company (NOC) KazMuniaGas (KMG), the global leader ExxonMobil and the Russia company LukArco (Lukoil) are closely reviewing the offers of the engineering companies to award the engineering, procurement and construction (EPC) contract for the Future Growth Project (FGP) to expand the on the west side of Kazakhstan.

The national oil and gas company Turkmengas State Concern (Turkmengas) is planning to invest $10 billion capital expenditure in a greenfield world-scale petrochemical complex at Kyyanly, also spelled Kiyanly, on East Coast of the Caspian Sea. Located in front Azerbaijan around the Caspian Sea and squeezed between Iran on the south and Uzbekistan – Kazakhstan in the north, Turkmenistan is ranked as the sixth largest country in the world by natural gas reserves.