The California-based international oil company (IOC) Chevron Corporation (Chevron) and its partners, the Kazakh national oil company (NOC) KazMuniaGas (KMG), the global leader ExxonMobil and the Russia company LukArco (Lukoil) are closely reviewing the offers of the engineering companies to award the engineering, procurement and construction (EPC) contract for the Future Growth Project (FGP) to expand the Tengizchevroil (TCO) oil field on the west side of Kazakhstan.

Covering 2,500 square kilometers near the Caspian Sea, the TCO oil field development includes the Tengiz field, the Korolev field and some other prospects to be developed. 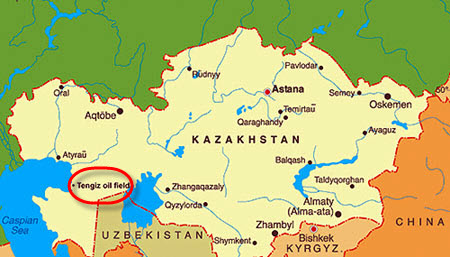 Discovered by 4,000 meters depth in 1930s, while the Soviets were prospecting the Pre-Caspian Depression, the first well started to produced the first oil from the Tengiz field only in 1979.

Despite its large size, Tengiz had been left undeveloped during decades because of its technical challenges.

In 1993, Kazakhstan and Chevron established the joint venture Tengizchevroil (TCO) from Chevron and the local Tengizneftegas Production Association, and signed a 40 years agreement.

In 1997, LukArco (Lukoil) took share in the TCO joint venture so that the working interests stand currently between:

Since its first development, Tengiz production has been supported by the construction of crude oil processing facilities called Complex Technology Lines (CTL) to separate the associated natural gas, the liquid petroleum gas (LPG) and the hydrogen sulfide.

This sour gas and re-injected in the reservoir to maintain the pressure and enhance the oil recovery (EOR) rate from Tengiz field.

If not carefully controlled, this re-injection of large quantities of sour gas may destabilize the crude oil reserves and turn Tengiz even more complex to develop.

In May 2012, TCO awarded the front end engineering and design (FEED) and engineering, procurement and construction management (EPCM) contract for the Wellhead Pressure Management package of the Tengiz Future Growth Project to a team led by Fluorand supported by WorleyParsons and the Kazakh Institutes KING and KGNT. 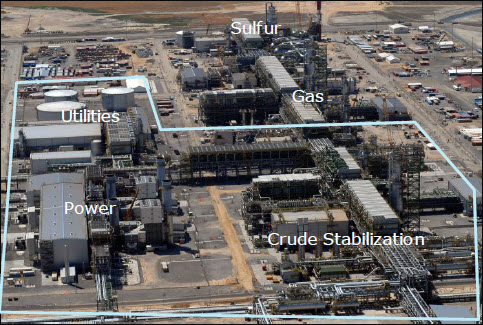 With the Future Growth Project, Chevron and its partners are planning to increase this capacity from the current 260,000 barrels per day to 780,000 b/d in two phases.

These crude oil processing SGP and SGF facilities will support the drilling program to add 190 wells in the Future Growth Project for a capital expenditure of $25 billion.

Because of the location,Chevron and its partners opted for a modular construction of the Second Generation Plants and Sour Gas Injection facilities.

Therefore the contenders to submit offers for the Future Growth Project construction had to propose world-class shipyards to produce and ship these complex modules in that quantity.

Two teams of South Korean contractors are in competition for the engineering, procurement and construction (EPC) contract of Future Growth Project.

Chevron and its partners had planned to sanction this contract last year but the Kazakh requirement to integrate 44% of local content in the Future Growth Project caused some delay to evaluate the local partners to be involved in the respective South Korean teams.

In order to manage the local suppliers and subcontractors, the Kazakh Government is putting in place the National Service Company (NSC) that will support TCO.

In parallel GE Nuovo Pignone has been awarded the gas compressors.

Since the Kazakhstan Government approved the TCO expansion project in October 2013, Chevron and its partners ExxonMobil, KMG and Lukoil are close the make a decision for the EPC contract of the Future Growth Project to come on stream in 2015 for the first phase and 2018 for the second phase.