Woodside in talks with ExxonMobil, BHP and Hess

Tokyo Gas and Kansai Electric are in the same time the purchasers of Pluto gas and the shareholders of the LNG project with working interest shared between;

– Woodside 90% is the operator

Pluto LNG project phase 1 was designed for a production capacity of 4.3 million t/y of gas.

On yearly base, Woodside is planning to produce 17 to 21 million of barrel oil equivalent (boe) with Pluto LNG project phase 1.

In its long term development program Woodside is considering to increase Pluto production with additional 37 million of boe, in beginning with Pluto LNG 2 project.

Estimated to $6 to 11 billion capital expenditure, the engineering company KBR performed the front end engineering and design (FEED) together with Foster Wheeler and WorleyParsons. 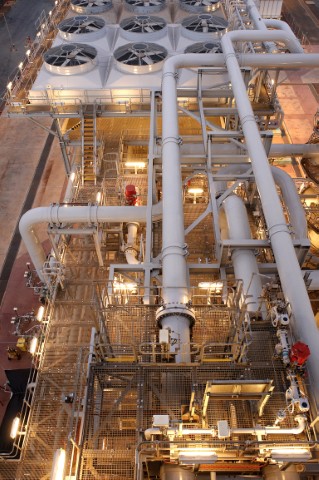 This FEED is now completed leaving Woodside the final investment decision (FID) in respect with the commercial contracts to be signed for the gas export and with enough natural gas supply to feed one or two LNG trains.

According to the actual infrastructures available on site including 120,000 cubic meter LNG storage capacity, condensate storage and export jetty,  Woodsite would like to speed up the Pluto LNG expansion.

In total Woodside designed the onshore Pluto lease with 200ha in order to accommodate the installation up to five LNG trains. of 4.3 million t/y capacity.

In that perspective Woodside has undertaken intensive appraisal drilling campaign within the Carnarvon basin and the Exmouth Plateau but so far falling short of discoveries in comparison with the 4.3 million t/y of gas capacity per LNG trains. to be added.

Unfortunately most of these appraisal wells drilled in the Carnarvon basin were not successful such as Banambu-1 and Ananke-1 on which Woodside founded high expectations to move ahead on Pluto LNG expansion.

On Banambu-1, Woodside and BHP had signed a Farm-in Agreement by which BHP  founded 100% of the drilling operations to be compensated by 40% of the shares.

Woodside was keeping 25% and the operator role while the local company Cue Energy Resources Ltd (Cue Energy) was holding the remaining 35%.

After plugging Banambu and Ananke wells Cue Energy withdrew from Pluto, while Woodside and BHP keep discussing on alternative sources of supply.

For BHP involved with ExxonMobil in Scarborough LNG there are four options:

– Build its own Onshore LNG trains will all required infrastructures

– Floating LNG on the same concept as Shell with Prelude

If the costs to build greenfield onshore LNG trains. were not that high in a context of uncertainty on the gas prices, ExxonMobil and BHP would have already made the final investment decision, so this option is not actually in favor.

ExxonMobil does not feel comfortable with the risks associated to the newly designed FLNG concept and may prefer to wait and see the first ones in operations before adopting. 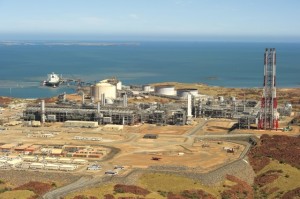 In this context, BHP and ExxonMobil may consider with positive attention, Woodside proposal for using onshore Pluto LNG expansion facilities to develop Scarborough.

In parallel Hess is moving forward with its Equus LNG project in awarding the front end engineering and design ((FEED) of the offshore part of the project to Intecsea and WorleyParsons.

So the actual progress of the Equus project comes up at the right moment for Woodside to find another potential alternative source of supply and for Hess to investigate the opportunity to reduce its capital expenditure.

The over capacity of ongoing onshore LNG trains projects, the up-spiraling costs and the uncertainties on the gas prices, even in Asia, are now questioning all the operators about their respective projects and motivate Woodside, ExxonMobil, BHP, Chevron and Hess to investigate solutions to optimize their respective assets and find compromise.