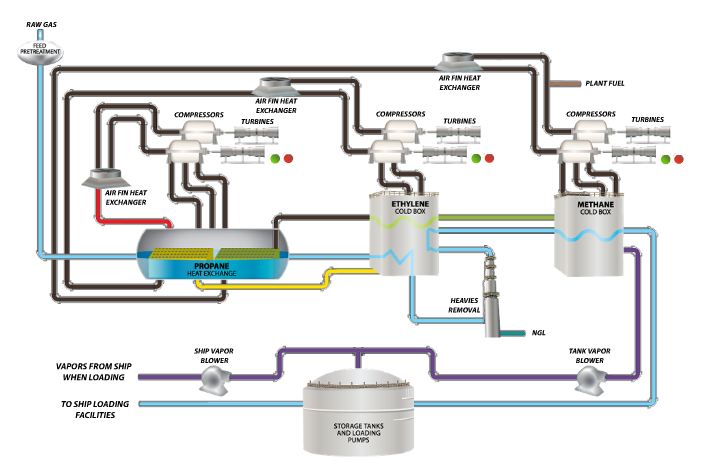 The process to convert natural gas into LNG is based on three steps, gas treatment, gas compression and refrigeration.

Since the natural gas contains many non-methane gas and impurities and water which can freeze and damage equipment during the compression phase, it must be treated to remove condentates or NGLs.

The liquefaction is completed by cryogenic refrigeration with propane condensers at -162°C.

Depending on the licenses, the phases of compression and refrigeration can be combined in different ways to optimize efficiency or reliability.

These compressors may be driven by turbines, they are called mechanical trains, or by large electrical motors leading to call them electrical trains.

In both cases the regulation of these compressors is critical because of their sizes in respect with the whole LNG plant and their source of supply in energy (gas,steam or electricity) as well as in natural gas feedstock.

Therefore the process also requires very strict safety measures and precautions during all liquefaction stages, due to the highly vulnerable and flammable nature of the gas involved.

For these reasons, all the LNG plants use normally two trains of compressors running in parallel. 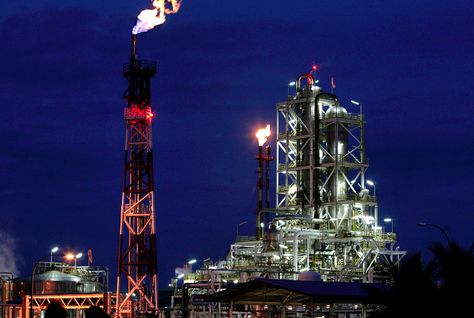 The largest LNG trains are actually in operation in Qatar, operated by Qatar Gas, ExxonMobil, Shell and ConocoPhillips with a production capacity of 7.8 million t/y (mtpa)per train.

After storage in refrigerated tanks, the LNG is loaded onto ships and delivered to a re-gasification terminal, called LNG  import terminal where the LNG is allowed to expand and reconvert into gas.