Tempa Rossa to lead oil and gas developments in Italy

Total and Shell have made the final investment decision (FID) on the Tempa Rossa oil and gas field development project.

Discovered in 1989, Tempa Rossa is located in the southern Apennines, at an altitude of 1,000 meters, on the unitized Gorgoglione concession, in the Basilicate region, Italy. 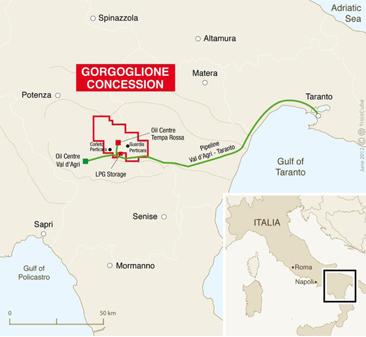 In June 2010, the drilling of the Gorgoglione 2 appraisal well reached its final depth by 4,000 meters and confirmed the results of the other wells during the first half 2012.

The oil and gas production will pass by eight wells out of which six are already drilled.

In 2011, Total acquired from ExxonMobil an additional 25% in the Tempa Rossa field, so that the actual working interests in Tempa Rossa are shared today between:

At plateau production level, Total and Shell are planning to produce:

With Tempa Rossa, Total and Shell will contribute to increase Italy’s oil production by 40% as a result.

As one of the biggest ever oil and gas upstream project being developed in Italy, Total and Shell are planning to invest $1.9 billion (€1.6 billion) capital expenditure in Tempa Rossa. 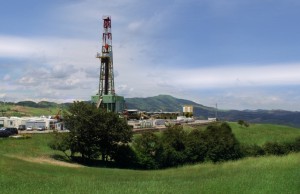 On the table for some years, the Tempa Rossa project was locked until to find a solution to transport the oil production to a refinery and export terminal.

Finally Total and Shell entered into an agreement with ENI to tie in its Val d’Agri-Taranto 51 cm in diameter and 136 km long pipeline to carry out the oil to the Taranto refinery in the Apulia region, to be then exported.

– LPG storage centre (2 underground tanks with a total capacity of 3,000 m³) with 4 road loading points to be located at Guardia Perticara.

– Tie-in to the Val d’Agri-Taranto pipeline

– Utilities expansion (creating water and electricity supply systems for the CPF, connections to existing networks for the transport and distribution of the hydrocarbons).

Total and Shell are planning Tempa Rossa oil and gas field development to be completed and to come on stream in early 2016.

Total signed a letter of intent (LOI) with Tecnimont S.p.A. and Tecnimont KT S.p.A., both subsidiaries of Maire Tecnimont S.p.A. (Tecnimont), for the implementation of the Engineering, Procurement, Supply, Construction and Commissioning (EPC) of the Tempa Rossa oil and gas central processing facility.

The overall EPC contract value will be approximately $ 600 million (€500 million).

The scope of the EPC contract is the main part of the Tempa Rossa oil field development project.

The contract includes the:

– Treatment of the associated gas and water

– Surface facilities on the well pads

– Connections of the flowlines and pipelines with Snam Rete Gas and with Taranto Refinery pipeline.

Maire Tecnimont is listed on the Milan Stock Exchange and is present in over 30 countries, controls over 50 operating companies and has about 5,300 employees, half of whom are located abroad.

Headquartered in Paris, France, Total is the fifth largest publicly-traded integrated international oil and gas company (IOC) in the world with operations in more than 130 countries.

Total engages in all aspects of the petroleum industry, including upstream operations (oil and gas exploration, development and production, LNG) and Downstream operations (refining, marketing and the trading and shipping of crude oil and petroleum products).

Total also produces base chemicals (petrochemicals and fertilizers) and specialty chemicals for the industrial and consumer markets (rubber processing, adhesives, resins and electroplating).

In Italy Total is present across the oil value chain and in Chemicals and photovoltaic solar energy.

The Tempa Rossa FID decision comes in a context where the Italian Government is planning to lift the ban on offshore oil and gas exploration imposed after the 2010 Gulf of Mexico spill.

In doing so and in addition to the $1.9 billion of the Total and Shell Tempa Rossa, Italy expects to attract $18 billion capital expenditure to re-start offshore projects abandoned in 2010 with companies such as Edison, ENI and Shell.