The super major companies Shell from The Netherlands and ExxonMobil from USA are head to head in intensive negotiations with InterOil Corporation (InterOil) for the development of world scale liquefied natural gas (LNG) projects in Papua New Guinea (PNG).

Listed in New York Stock Exchange, InterOil was established in 1997 to take a leading role in the energy sector of Papua New Guinea.

After building up and operating the first crude oil refinery in Port Moresby, Papua New Guinea, InterOil took over Shell retail and distribution network in Papua New Guinea in 2006.

In parallel InterOil acquired its first licenses for oil and gas exploration in 2005.

After the first discoveries in Moose in 2005, the Elk and Antelope appeared to be promising enough  to support a LNG project.

In 2010 GLJ Petroleum Consultants estimated the resources in:

Based on these reserves, InterOil made several attempts for joint venture and frame agreement with other junior companies to develop different LNG projects. 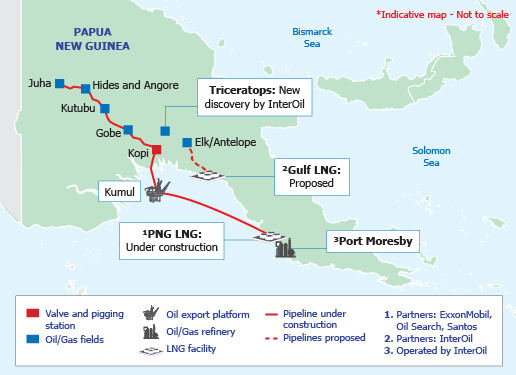 Until end of 2012, none of these  projects could reach the final investment decision (FID) in the time frame allowed by the licenses awarded to InterOil.

As a result in November 2012, the Government of Papua New Guinea decided to increase its stake in the Gulf LNG Project from the original 22.5% to 50%.

In addition and in order to secure the flawless execution of the project, PNG Government and InterOil decided to set partnership with a major company providing its technological expertise and project management experience for a world scale LNG project.

In this scenario the Gulf LNG project should be phased up with a first LNG plant sized at 3.8 million t/y of LNG instead of the original 8 to 10 million t/y.

This first phase should come on stream in 2016 and should be followed up by a second and a third phase expected to start commercial operations in 2018 and 2020.

The Gulf LNG project has been designed around two packages, upstream and midstream.

The upstream part of InterOil Gulf LNG project should include:

The midstream package of InterOil Gulf LNG projects should cover:

Based on this front end engineering and design (FEED) InterOil and the PNG Government have initiated discussion with Shell to take shares in the project. 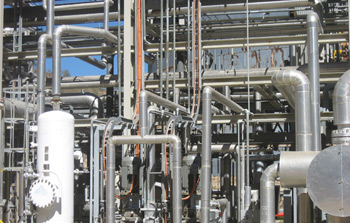 In the meantime, ExxonMobil and InterOil signed an exclusive provision by which ExxonMobil would acquire 4.6 trillion cubic feet from the Elk and Antelope fields.

With this additional supply of natural gas, ExxonMobil could secure the feedstock for a third LNG Train at its ongoing PNG LNG project.

ExxonMobil is currently completing the $19 billion construction of the two first LNG Trains in Papua New Guinea where the existing infrastructures were designed to support two additional trains with a capacity of 6.9 million t/y.

In a way the PNG Government realizes that ExxonMobil solution offers the simplest and most profitable solution to develop the Elk and Antelope gas fields but in another way the partnership between Shell and InterOil would balance ExxonMobil position in Papua New Guinea.

For these reasons, it could also be that InterOil and Papua New Guinea Government decide to develop both projects, first Gulf LNG Train with Shell, and  third PNG LNG Train with ExxonMobil in parallel in order to avoid further delays to sign LNG export agreements.