The Russian Novatek and the international oil company (IOC) Total from France have selected, through their joint venture JSC Yamal LNG, the consortium made of Technip from France and JGC from Japan to build the liquefied natural gas (LNG) plant of their Yamal project.

Located onshore, in the Arctic area of the Yamal Peninsula in Russia, the Yamal LNG project is to develop the wet gas resources of the Yamal -Nenets region.

In the Yamal peninsula Novatek and Total have estimated the proven and probable reserves (2p) of natural gas and condensate to 800 million barrels of oil equivalent (boe).

For the Yamal project, the natural gas should come from the South Tambeyskoye field in the northwest of the peninsula. 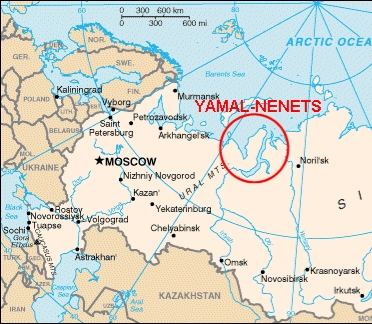 From these reserves, they expect to produce 90,000 boe/d at plateau production.

All the natural gas will be converted in LNG to be exported, mainly to Asia.

In the JSC Yamal LNG joint venture, Novatek and Total share working interests such as:

In 2010, Novatek and Total has selected CB&I from USA to perform the pre-front end engineering and design (pre-FEED) work of the project.

In 2011, CB&I completed this pre-FEED and signed the front end engineering and design (FEED) contract.

In 2012, CB&I delivered its conclusions from the FEED to Novatek and Total.

From these conclusions, the Yamal gas field development project is estimated to require $20 billion capital expenditure including: 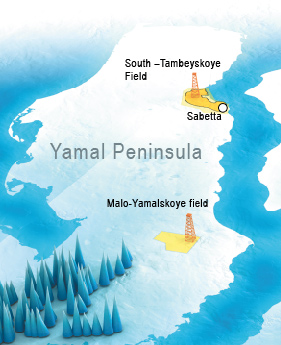 – Transportation infrastructure with highways and aiport as only the railway is crossing the Yamal peninsula for now.

Among all these packages to be awarded by Novatek and Total for engineering, procurement and construction (EPC) contracts, the consortium made of Technip and JGC won the Yamal LNG plant, the master piece of the Yamal project.

With $4 billion capital expenditure the Yamal LNG project will have a capacity which has been revised upward since the FEED from 15 million tons per year (t/y) to 16.5 million t/y. 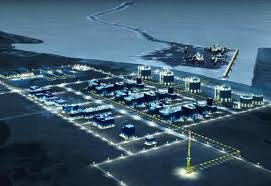 The production of the LNG plant will be provided by three LNG Trains of 5.5 million t/y each.

According to the terms of the contract, Technip is leading the consortium with JGC to execute the engineering, procurement, supply, construction, and commissioning of the LNG plant.

Despite the size and complexity of the project, Novatek and Total are targeting the start operations of the Yamal LNG project in 2017.

From now the completion of the Yamal LNG project should therefore take four years, which is about the same time as the LNG projects of similar size built in Qatar in the year 2000’s.

But in the Russian arctic region, the winter is lasting longer than in Qatar reducing the effective period for construction and challenging Technip and JGC to deliver on time.

Despite all the challenges of the Yamal LNG project, Novatek and Total want to proceed on fast track because of reasons belonging to Russia, Europe, China and Japan.

In Russia, since the re-election of President Poutine,  the Yamal project has been declared of national interest, thus to be implemented on fast track. 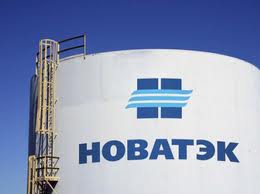 In Europe the consumption of natural gas is declining or stabling under the pressure of the coal imported at low price from the USA as first victim of the shale gas.

As a result Gazprom had to renegotiate downward its so called take or pay contracts with European partners.

With American companies multiplying LNG export projects to Europe where the prices are anyway 3 to 4 times higher, the perspective for the Russian gas in Europe are darkening.

For these reasons, Russia anticipated the market changes in shifting its pipeline projects from west to east toward China and Japan.

With China the discussions to close the gap between the $250 per thousand cubic meter proposed by Chinese and the $300 requested by Russian made significant progress in March during the visit of the Chinese President Xi Jinping to Kremlin.

A solution could take place in 2013 on 38 billion cubic meters of gas to be exported per year from Russia and the construction of a $25 billion export pipeline to China.

In 2012, Japan imported 87.5 million tons of LNG for an amount of $64 billion damaging heavily its trading balance.

So far Japan is buying gas based on long term contracts  called Japanese Crude Cocktail (JCC) to secure its supply despite the short term fluctuations.

Indexed on a basket of crude oils from different sources, the resulting price in Japan is about 6 times higher than in Henry Hub spot market in USA.

Therefore Japan is now working on establishing a spot market for the gas in its Tokyo Commodity Exchange.

This new trading facility could be in place on the next two years affecting directly the way to sell gas to Japan.

In addition the numerous LNG projects mushrooming in Australia, East Africa, West coast of North America will come in direct competition with the Russian gas offering.

In this context Russia is willing to speed up all its LNG projects such as Yamal LNG and Vladivostock LNG.

Well in progress the Vladivostock LNG project meets some local difficulties with environmentalists because the pipeline to supply it should cross sensitive wild areas.

This environmental challenges may cause some delay to the Vladivostock LNG project.

For all these reasons, the Yamal LNG project is getting very strategic for Russia giving the obligation to Novatek, Total and their key contractors Technip and JGC to deliver on time in 2017.