The Yamal Peninsula and the near by Gydan Peninsula concentrate among the biggest reserves of natural gas and condensate in the world.

All together, the Yamal Peninsula concentrates 9,393 billion of barrel oil equivalent (BOE) 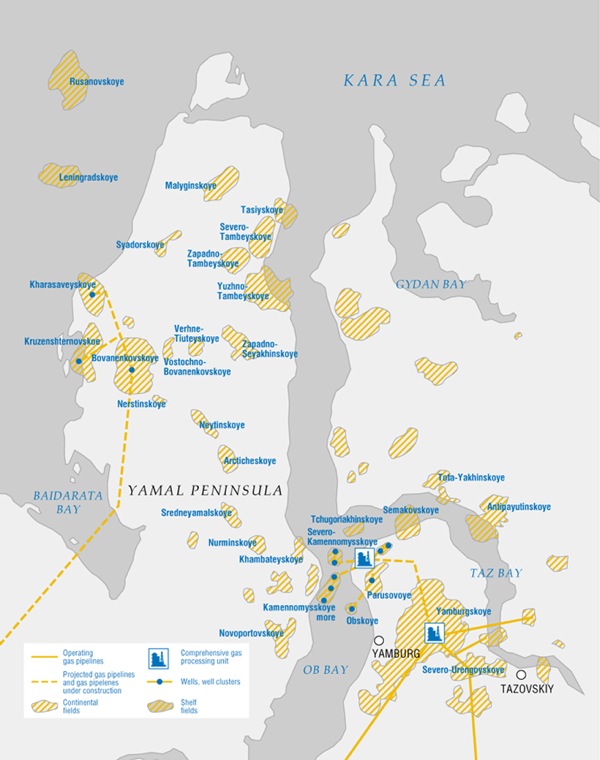 Both companies OAO Gazprom (Gazprom) and OAO Novatek (Novatek) hold the licenses for the development of these fields very closed from each other.

Gazprom’s Severo-Tambeyskoye, Zapadno-Tambeyskoye and Tasiyskoe fields pertain to the Tambey group of fields located on the Yamal Peninsula in close proximity to the Sabetta Port and the Yuzhno-Tambeyskoye field where infrastructure being currently developed.

The aggregate ABC1+C2 natural gas  reserves of these fields make up 1.56 trillion cubic meters which allow producing some 20 million t/y of liquefied natural gas (LNG) in 2018.

For these reasons the Russian Government sees in Yamal and Gydan Peninsulas an opportunity for Gazprom and Novatek to join forces and to speed up the development of new oil and gas fields to compensate the depletion of the maturing or aging fields.

Gazprom and Novatek signed a Memorandum of Cooperation 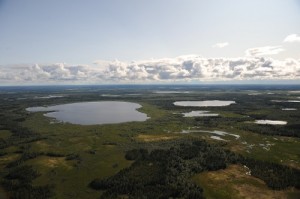 Gazprom and Novatek have signed a Memorandum of Cooperation whereby Gazprom and Novatek are considering the possibility to establish a joint venture to increase LNG production capacity on the Yamal peninsula as well as jointly developing hydrocarbon resources on the Gydan peninsula.

Gazprom and Novatek consider establishing a joint venture based on the hydrocarbon resources of Gazprom’s Tambey fields to increase LNG production on the Yamal peninsula with working interest shared between:

In parallel Gazprom and Novatek plan also to establish another joint venture based on Novatek‘s Utrenneye (Salmanovskoye) field to develop the existing assets located on the Gydan peninsula with shareholdings;

Gazprom and Novatek will formulate and approve an integrated program for developing their fields on the Gydan peninsula.

On April 27th, the French oil group Total increased its stake in Russia’s No.2 gas producer Novatek to 15%.

Total first bought into Novatek in March 2011, paying $4 billion and valuing the company at around $40 billion.

It earlier said it had paid $800 million to increase its stake in Novatek to more than 14%, with plans to raise that stake to 19.4% within three years.

By lifting its stake in Novatek, Total effectively boosts its access to Russian natural gas  reserves regardless of the decisions to come on Shtokman.

In parallel of the Novatek‘s capital acquisition, Total has completed also the takeover of 20% stake of Yamal LNG project.

Novatek says the deal has been concluded through subsidiary, Novatek North-West, and will see Total provide financing for project development and its expertise in LNG processing.

Novatek is taking part in the development of a LNG plant at the Yuzho-Tambeiskoye deposit in Yamal, where proven reserves stand at 1.26 trillion cubic meters of natural gas and 51.6 million tonnes of condensate.

The LNG plant will have a processing capacity of 15.5 million t/y LNG  and up to 1 million t/y of condensate, with the launch of its first production line planned for 2016.

With Novatek sharing working interests with Gazprom and with Total in different LNG projects, in the Yamal peninsula, as well as considering joint development of hydrocarbon resources of the Gydan peninsula, the Russian Government may be confident to offset declining production in the Nadym-Pur-Taz region.