Depletion refers to the decline of production of an oil or gas field.

Depletion may also be used for accounting in a similar way as depreciation to allow an owner or operator to account for the reduction of a product’s reserves.

For tax purposes, there are two types of depletion; cost depletion and percentage depletion. 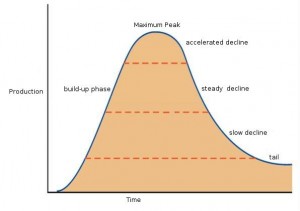 The principle of the depletion was described by the Hubbert peak theory which was developed to make oil and gas production forecast based on previous production performances.

The Hubbert peak theory came to the conclusion that the production curves of non-renewing resources approximate a  bell curve.

It means that as soon as the production has reached a peak, the decline will follow an exponential curve.

The depletion may be related to different entities; a well, an oil and gas field, or the global oil and gas production.

A single well will typically decline according to a bell curve where it begins with a rapid drop that will slow down until full depletion.

At this stage the wells are called marginal or stripper.

This natural depletion of the well may be influenced by different technologies called enhanced oil recovery (EOR).

EOR may use water or gas injection, chemical injection either to restore the pressure in the reservoir, either to facilitate the free flow of the oil and gas and increase the recovery rate.

An oil and gas field is an aggregate of wells and these wells are normally deployed by the operating company along a field development plan which cover years if not decades.

It means that new wells will enter in production while the first ones are maturing and then declining.

From the field perspective the operator will schedule the new wells to compensate the old ones so that the field production will reach a plateau as fast as possible and sustain this plateau as long as possible.

Then when all the possible wells will have been drilled the overall production of the field will start to drop from the plateau and decline.

For the oil field the decline of the whole field is usually slower than a single well as it is unlikely that all aging wells should decline in the same time.

For a natural gas field the decline will be close to the same as a well since the overall pressure drop in the reservoir will affect all the wells.

The EOR technologies can also contribute to slow down the depletion process.

On the last century the oil and gas production was issued from the fields easier to explore and cheaper to produce.

Most of these fields such as in the North Sea are now maturing and depleting.

In parallel the global energy consumption was fast increasing until the years 2000s to since stabilize because of the too high raw materials prices or economical recessions.

The high energy prices has facilitated the development of new technologies to explore and produce resources that were considered so far as unaffordable such as tar sand, deep offshore, pre-salt, shale gas, shale oil or arctic fields.

As a result of theses economical and technology evolutions, the new fields are balancing the production of the depleting ones so that the world production is currently running along a plateau more than following the famous peak oil theory.

This peak oil theory is to replicate to the global oil and gas production the same bell curve as developed in the Hubbert peak theory for a single well.

Another consequence of the economical and technology changes is to revise continuously the volume of proven reserves.

These technological challenges to develop new fields in extreme conditions have a cost.

In 2008, the International Energy Agency (IEA) which represent the consumers countries had estimated it to $ 360 billion per year the amount of capital expenditure to be invested in new fields in order to compensate the depletion of the old oil and gas fields.