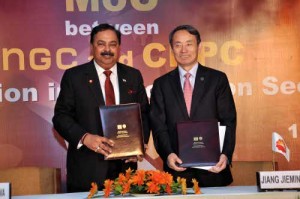 This MoU signed between ONGC and CNPC marks the intention of the fast emerging countries India and China to establish and consolidate their energy portfolios globally instead of competing to get access to oil and gas reserves, and in the development of technologies to catch up with Majors IOCs.

The companies have already set up a robust relationship, mainly in the areas of upstream exploration and production business.

With this MoU, the companies have agreed to foster their cooperation either directly or through their subsidiaries by expanding cooperation in:

– Midstream including construction and operation of oil and gas pipelines.

– Downstream projects from refining or processing of crude oil and natural gas up to marketing and distribution of petroleum products.

The areas of cooperation between ONGC and CNPC will also extend to joint participation in suitable hydrocarbon projects in other countries of interest by exchanging information and working for mutual growth and benefit by extending cooperation in hydrocarbon sectors globally. 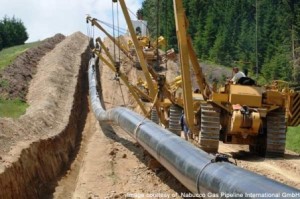 This MoU has been initiated upon the positive and productive experience of ONGC working with CNPC in ONGC Videsh Ltd (OVL), the overseas arm of ONGC, in international operations in Syria, Sudan and the Myanmar Pipeline Project where CNPC is a key participant.

OVL invested $2.5 billion in petroleum exploration and production in undivided Sudan as part of Greater Nile Petroleum Operating Co., in which it owns a 25% stake.

The last years co-operation through affiliates between both companies was also marked by ONGC’s great achievements in E&P infrastructure at a level where only a few companies worldwide can be proud of.

CNPC and ONGC did have an earlier arrangement, but limited to hydrocarbon exploration and production.

The primary purpose of the new agreement, however, seems to be to ensure that bidding for global energy assets doesn’t get out of hand as it has in the past.

The deal could also see CNPC participating in efforts to develop and exploit ONGC’s domestic assets.

The development comes at a time when India and China have been discussing ways to double bilateral trade to $100 billion by 2015 and to plug a yawning trade gap in China’s favour.

CNPC is China‘s largest oil and gas producer and supplier, as well as one of the world’s major oilfield service providers and a globally reputed contractor in engineering construction (EPC)

CNPC has oil and gas assets and interests in 30 countries in Africa, Central Asia-Russia, South America, the Middle East and the Asia-Pacific.

– Oil and gas field services and engineering activities in 55 countries around the world.

Over 50 years of its existence ONGC has grown to be one of the largest E&P companies in the world in terms of reserves and production.

Today, Oil and Natural Gas Corporation Ltd. (ONGC) is, the leader in Exploration & Production (E&P) activities in India having:

ONGC has established more than 7 Billion Tonnes of in-place hydrocarbon reserves in the country.

In fact, six out of seven producing basins in India have been discovered by ONGC.

OVL is the only company among Indian state-owned firms with producing assets overseas.

It has a presence in 15 countries through participation in 33 projects and has proven balance of oil and gas reserves of 202.908 million t.

Through this MoU, CNPC and ONGC plan to give a leap to their respective Market Leadership with more management engagement on important global assignments beyond the current projects so that this MoU will go a long way towards establishing a strategic partnership.