Quicksilver looks for partners for Discovery LNG in B.C.

The junior Texas-based company Quicksilver Resources Inc. (Quicksilver) is looking for partners to share the opportunity to export liquefied natural gas (LNG) to Asia through the Discovery LNG project along the Campbell Channel on the Vancouver Island in British Columbia (B.C.), Canada.

Established at Fort Worth in Texas , USA, in 1963 as a private company, Quicksilver has grown up along the last fifty years on upstream activities covering oil and gas and the production of natural gas liquids (NGLs).

With the evolution of the technology, Quicksilver focused on unconventional oil and gas and coal bed methane in North America.

Quicksilver main operations are concentrated in the Barnett shale gas of the Fort Worth Basin in Texas and in the Horn River Basin in the Northeast of British Columbia in Canada.

In 1999, Quicksilver became a public company and on the recent years continued to acquired shale gas acreages in the Horn River Basin.

With its balanced activities in unconventional resources in USA and Canada, Quicksilver could realize the opportunity to export LNG out of Canada with the support of British Columbia Authorities while US Government is mitigating the pressure of the US petrochemical to limit LNG export to non-free trade agreement (non-FTA) countries.

On early 2013, Quicksilver bought from Catalyst Canada the old site of the Elk Falls pulp and paper mill on the Campbell River in the perspective to convert this existing industrial site into the Discovery LNG export terminal.

In picking up one of the few abandoned industrial site on the Canada West Coast, Quicksilver faces some extra costs to remediation but will save time and efforts to win local acceptance for its Discovery LNG project.

The size and number of LNG Trains are not yet fully defined and will depend on the partners joining Quicksilver in the Discovery LNG project.

Therefore the Campbell River site offers space enough for future expansion phases on the Discovery LNG project depending on the partners to join.

At these early days of the feasibility study, the Discovery LNG project is including: 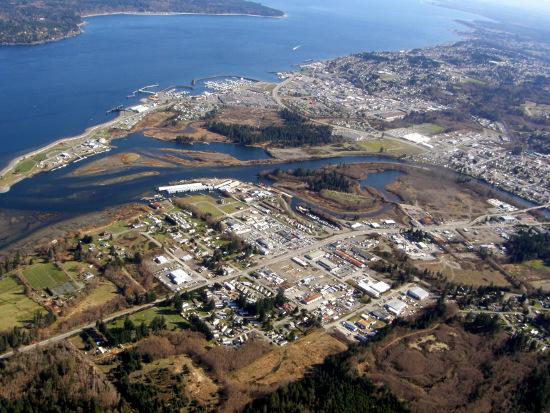 – LNG Trains in number and size still to be defined

Based on this concept, Quicksilver is planning two years to finalize agreement with partners and to complete the approval process with Canada Authorities.

Then Quicksilver is targeting to go through the front end engineering and design (FEED) and engineering, procurement and construction (EPC) phase in order to start loading first LNG carriers from the Discovery LNG on the Campbell River by 2019.