The Algerian national company Sonatrach and the France-based utility and energy group GDF-Suez selected the Spanish engineering company Tecnicas Reunidas to execute the engineering, procurement, construction and commissioning (EPCC) contract for the development of the giant Touat gas field in southwestern Algeria.

In the Touat project, Sonatrach and GDF-Suez established a joint venture called Groupement TouatGaz where the working interests are shared as following:

GDF-Suez and Sonatrach are planning to spend $2 to $3 billion capital expenditure for the development of the giant Touat gas field. 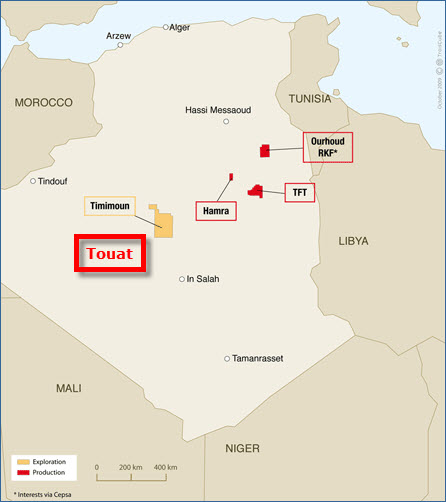 This Touat gas field belongs to the Sbaa Basin located 1,500 kilometers southwest of Alger, in the northeast region of Adrar City.

With the Touat project, GDF-Suez and Sonatrach intend to develop the Blocks 352a and 353a covering approximately 3,000 square kilometers.

GDF-Suez and Sonatrach have estimated the proven and probable reserves (2P) in Touat around:

From these reserves, GDF-Suez and Sonatrach are targeting a plateau production of:

During some years where all the Algerian projects were left on hold because of the lack of a pipelines system to supply the refining and petrochemical projects in the north, along the Mediterranean Sea, from the gas fields left untapped in the south of the country.

Since the Algerian Government has decided to proceed with the expansion of its pipelines system, the upcoming GR-5 gas pipeline will unlock the Touat gas field and connect it to the Hassi RMel National Gas Dispaching Center (CNDG).

Anticipating on the construction of this pipeline network and the development of the Touat project, GDF-Suez had signed in 2011 a contract with Sonatrach to export 1 billion cubic meters per year (cm/y) of natural gas to Spain for a period of 20 years.

On the first half 2013, GDF-Suez and Sonatrach organized the call for tender for Touat EPCC contract.

Four engineering companies submitted their best technical and commercial bids out of which the Spanish Tecnicas Reunidas won the contract with an offer at $1.02 billion.

With the plan to drill 40 wells to develop the Touat gas field, the first phase awarded to Tecnicas Reunidas include to:

– Provide and deploy over 150 kilometers the associated gas gathering system

– Install the compressors and dehydration units

– Construct the removal units for the sulfides and carbon dioxide

In respect with the remote location of the Touat gas project isolated of any utilities, the EPCC package awarded to Tecnicas Reunidas covers also the:

When completed by Tecnicas Reunidas, GDF-Suez and Sonatrach expect this first phase of the Touat gas field development project to deliver 13 million cubic meter per day of natural gas by 2016.