Since November 2012, the Anglo-Dutch international company, Shell, and China National Petroleum Company (CNPC or PetroChina) multiplied announcements to reconsider their Arrow LNG project in the Queensland in eastern Australia.

Shell and PetroChina wholly own the Arrow LNG project through a 50/50 joint venture with the intention to invest $20 billion capital expenditure in the development of the Bowen and Surat onshore gas fields and Curtis Island export liquefied natural gas (LNG) trains. 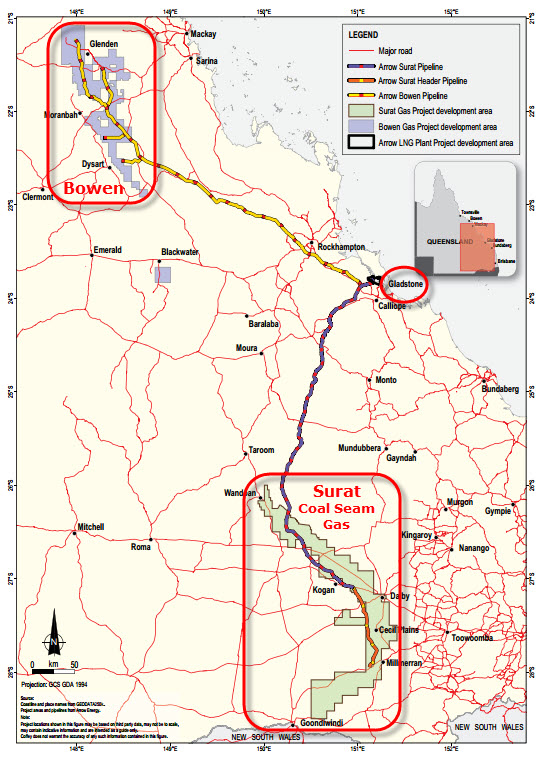 On the upstream side of the Arrow LNG project, Shell and PetroChina are planning to extract the coal-seam gas (CSG)  from the coal-bed methane of the Bowen and Surat basins located 160 kilometers west of Brisbane.

For the export of the gas, Shell and PetroChina were initially considering to build a LNG facility on the Curtis Island.

The Bowen and Surat gas fields should be connected to the Curtis Island by a gas export pipeline from the Bruce Highway to Curtis Island.

But this Arrow LNG project comes in the fourth position in the series of similar LNG projects to be all erected in the Curtis Island:

In addition to Arrow LNG, Shell has interests in other LNG projects in Australia with Prelude FLNG, Crux FLNG and Gorgon LNG together with Chevron.

Trough this large observer position, Shell could measure the consequences on the costs and time frames of this accumulation of LNG projects, onshore  in the Queensland as well as offshore Western Australia with there respective onshore LNG facilities.

When Shell, ExxonMobil and Chevron, the operator, made the final investment decision (FID) on Gorgon LNG, the budget was estimated around $37 billion capital expenditure with first production to come on stream on 2014.

Actually Shell estimates that it should cost $20 billion more.

In the Queensland, the three LNG projects already engaged will require more than $70 billion with free space available for LNG trains expansion.

These projects are also challenged by costs escalation because of the local labor work force shortage.

In addition two of them, Gladstone LNG and Queensland Curtis LNG, may have hard to develop the upstream side capacity sufficiently to load the designed export LNG trains

In the context of costs escalation and available LNG capacities on the Curtis Island, Shell and PetroChina are reconsidering their strategy to develop Arrow LNG in two phases:

– Phase 1: To implement the upstream coal-seam gas production within a planning matching with budgeted costs and using available capacities from in coming Curtis Island LNG facilities for liquefaction

Shell currently holds discussions with Santos and BG Group to investigate opportunities for a deal allowing Arrow LNG to share their respective LNG trains facilities for export in the meantime to launch the phase 2.

On Arrow LNG upstream portion of the project, Shell and PetroChina are evaluating the engineering companies in competition for the front end engineering and design (FEED)  of the coal-seam gas production. 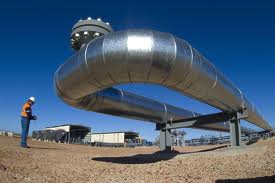 The scope of work should cover:

If successful, the FEED contract should be converted into engineering, procurement and construction management (EPCM) contract by the end of 2013.

Shell and PetroChina are reaching the final stage of the technical and commercial bids submitted by:

Regarding the Arrow LNG trains facility that should come in Phase 2 , Shell and PetroChina qualified:

– CB&I from USA with Saipem from Italy

– Fluor from USA with JGC from Japan and Clough from Australia

With this two steps approach on the Arrow LNG project, Shell and PetroChina expects to keep costs under pressure on the upstream portion and to save time and money for natural gas export in benefiting from the LNG trains projects already in progress from Santos or BG Group on the Curtis Island in the Australian Queensland in order to start production and export by 2018.