FLNG is the acronym of Floating Liquefied Natural Gas and refers to floating production unit of liquefied natural gas (LNG).

Floating Liquefied Natural Gas is not the chemical derivative of any form of natural gas, this wording was invented to describe the manufacturing process to produce LNG.

At the wellhead, the natural gas is in fact a raw natural gas containing a mixture of Methane (natural gas); other gases such as Ethane; natural gas liquids (NGL), also called condensate, such as butane and propane; and impurities such as sulfur. 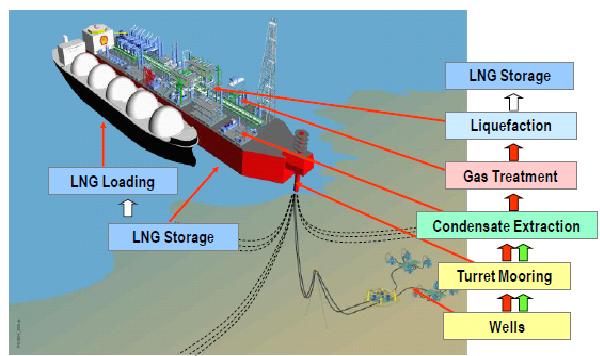 Among all the components of the raw natural gas, only the natural gas or methane goes through the Liquefaction process.

This liquefaction is performed by compression of the natural gas at moderate pressure and cooling at the cryogenic temperature of – 160°C.

But before being processed into the LNG Trains, the raw natural gas released by the wellhead must be treated to separate the methane from the other gases, condensate and impurities. 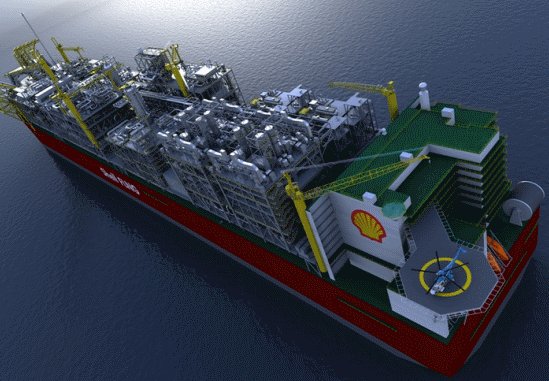 Once separated the methane, the condensate and impurities require their own transport mode which represent always a significant costs of the projects.

Depending on the balance between these components and the distance between the field and the export terminal, the engineering companies will perform a conceptual study to define the most optimized combination and locations to install the gas central processing facilities (CPF) close the wells and the LNG Trains to be located either immediately behind the CPF or close to the export terminal.

Whatever is the combination, all the dedicated pipelines connecting the fields to the export terminal, all the way through the CPF and the LNG Trains, may represent up to 30% of the project total capital expenditure, especially with offshore fields.

In addition in some countries reclaiming lands to install LNG plants is not always easy because of the environmental impact and the local inhabitants acceptance.

In this context, some companies such as Shell and Technip have imagined and develop the concept of performing the liquefaction operations offshore, just above the gas field to reduce infrastructures and save all extra costs. 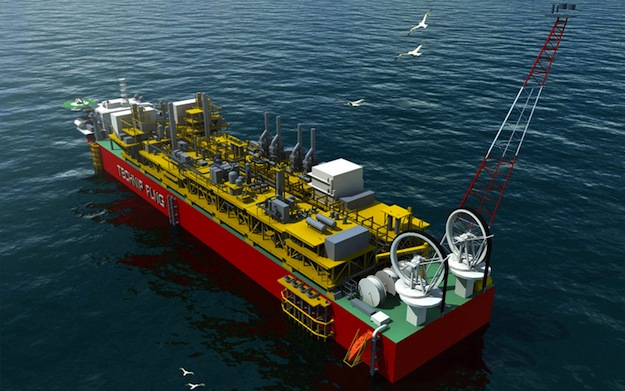 Using the biggest vessels ever built, these floating LNG Trains integrate all the functions from the wellheads to export.

The raw natural gas is treated by separation and the methane is liquefied to be stored and offloaded on line to LNG carriers.

The first floating LNG to be put in operation should be:

-Prelude from Shell, designed and constructed by a joint venture between Technip from France and Samsung from South Korea

– Sarawak from Petronas, designed by Technip and Daewoo from South Korea