The first week of March gave the opportunity to Rosneft to unveil its objective to go global in multiplying strategic partnerships with leading companies such as ExxonMobil.

These 20 blocks are located in the: 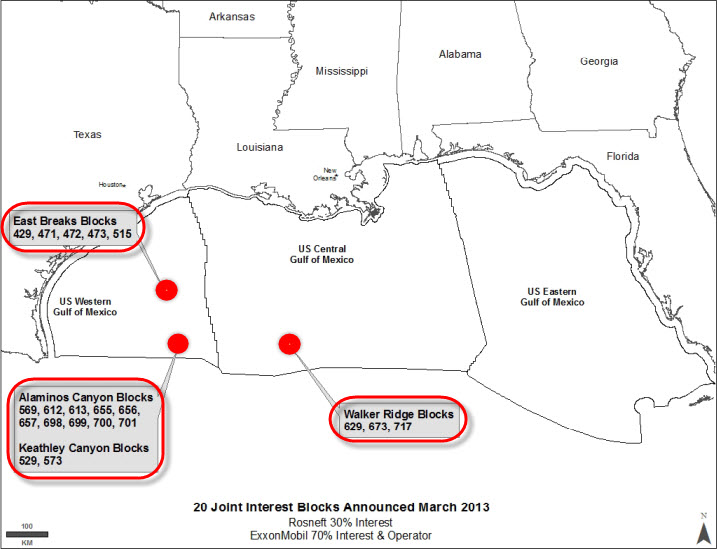 So far ExxonMobil was the sole owner of the licenses of these blocks and the operator of the exploration.

None of these blocks has currently reached the stage to come into production.

According to the terms of the Farm-in Agreement, Rosneft through its subsidiary Nefetgaz will take 30% interest in these 20 blocks.

ExxonMobil will keep the operator role but the two companies intend to implement a close cooperation in developing these oil and gas deep offshore fields.

This Farm-in Agreement is part of the Strategic Cooperation Agreement signed in 2011 to explore and develop oil and gas fields in Russia but also overseas where ExxonMobil had interests to be shared.

Through this cooperation Rosneft and ExxonMobil agreed to share their respective expertise in exploring and developing specifically hard to reach conventional and unconventional resources.

In selecting these blocks within ExxonMobil portfolio to implement their Strategic Cooperation Agreement, Rosneft expects to benefit from ExxonMobil expertise and good practices in deep offshore that could be replicated in the Black Sea.

Based on this cooperation, Rosneft and ExxonMobil will be able to revive the Tuapse Trough project covering 11,500 square kilometers by 1,000 to 2,000 meters water depth in the Russia Continental Shelf of the Black Sea offshore the coast of the Krasnodar region.

Discovered in 2003 and with 3D seismic survey completed in 2010, the Tuapse Trough project is very similar to Gulf of Mexico deepwater project.

This very promising region could hold up to 70 prospective structures to be developed in ultra deep water.

On March 7th 2013, Igor Sechin, Rosneft Chief Executive Officer, showed up by surprise at the IHS CeraWeek in Houston, Texas, to invite US companies for closer cooperation with Rosneft on the example of the partnership signed with ExxonMobil.

In his call, Mr Sechin had a special attention to the field service companies such as Halliburton, Schlumberger or Weatherford well known for their key role in developing deep offshore oil and gas fields as well as unconventional resources such as shale gas or tight oil.

Rosneft is expecting to see more of these companies in Russia and all over the globe where Rosneft has interests and the crude oil turns hard to reach and explore.

In the actual context Venezuela could be one of these country where they could cooperate as the extra heavy crude oil of the Orinoco belt is well known by the US field services companies.

In September 2012, Mr Sechin was leading the Russian consortium, made of Gazprom, Lukoil, Rosneft, Surgutneftegaz and TNK-BP, teaming up with the national oil company PDVSA to develop the block Junin-6.

Since then, two Russian partners of the consortium TNK-BP and Surgutneftegaz withdrew from the project and sold their interests to Rosneft.

Together with Gazprom and Lukoil, Rosneft and PDVSA are planning to invest $25 billion capital expenditure in the PetroMiranda project to develop the junin-6 block.

Depending on the evolution of the political context in Venezuela, Rosneft may provide the opportunities to the US companies to invest again in the extra heavy crude oil of the Orinoco belt.

Through strategic alliances and partnership with major companies such as BP, Eni, ExxonMobil, Statoil or Total, Rosneft is developing its own production in Russia but also running global with now significant positions in Middle East (Iraq), North America (USA) and South America (Venezuela) to become a global company with the corresponding range of expertise.