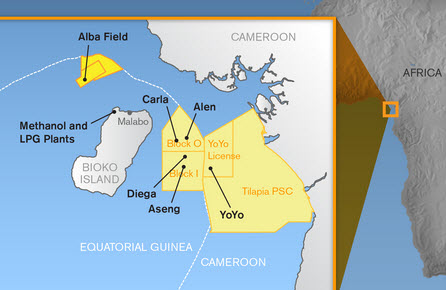 Discovered in 1984, the Alba wet gas field entered into production in 1991.

Since 2002, Marathon, through its local subsidiary Marathon Equatorial Guinea Production Ltd (GE Petrol) is developing the non-associated gas of the Alba field with Noble represented by its local company Samedan of North Africa Inc. (Samedan), and the local CNPGE.

All together they share the working interests in the Alba gas field in the following way:

– Marathon 63% is the operator

As a liquids rich gas field, the Alba field is currently one of the largest producer of natural gas and condensate of the Guinea Gulf.

Alba gas reserves are estimated to 4.6 trillion cubic feet (tcf) from which the production of condensate has reached 65,000 barrels per day (b/d). 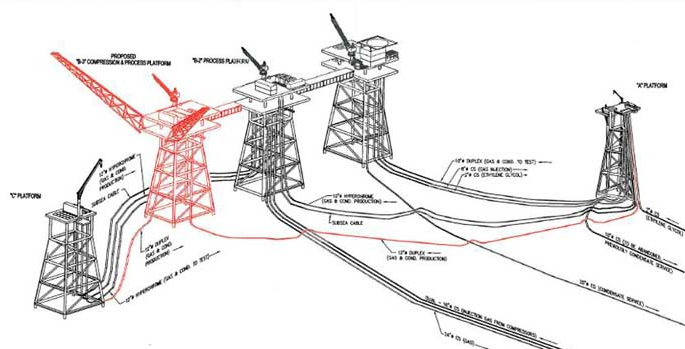 Over the years Marathon and its partners expanded Alba offshore facilities with two production platforms B1 and B2 supporting 11 producing wells and 5 gas injection wells.

The gas and condensate are extracted and exported to gas central processing facility (CPF) located onshore at Punta Europa on the Bioko Island.

Once treated the dry gas represents 130 million cf/d of feedstock to be converted into 3,000 tonnes per day (t/d) of methanol and 3.7 million t/t of liquefied natural gas (LNG).

With this monetization of the natural gas, Marathon contributed to eliminate the flared gas.

Marathon to ramp up gas supply to Bioko Island LNG

In parallel the condensate are separated in five different natural gas liquids (NGL) such as butane and propane.

In this context and in respect with the remaining reserves of the Alba wet gas field, Marathon and its partners, Noble and GE Petrol, have decided to continue the development of the Alba field with a third gas compression platform. 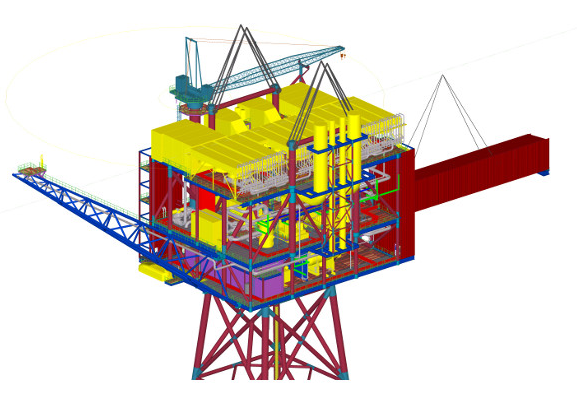 Headquartered in The Netherlands, Heerema Fabrication Group (HFG) won the EPCI contract to build this Alba B3 gas compression platform.

This B3 platform should be bridged to the existing B2 platform.

These topsides have been designed to fit in a cube of 40 meters side and the jacket as a square of 33 meters side supported by 81 meters height legs.

Designed at front end engineering and design (FEED) stage by Wood Group, the Alba B3 compression platform should have a capacity of:

Heerema will subcontract the process part of the detailed design to  lv-Oil & Gas also from the Netherlands.

In close co-operation with Marathon, lv-Oil & Gas will executes its section of the contract from its Houston, Texas, office.

The transportation and installation will be performed by the Heerema Leiden office in The Netherlands.

The flare structure and the bridge will be executed in Equatorial Guinea as part of the local content of the Alba B3 gas compression platform project.

With this EPCI contract awarded to Heerema, Marathon and its partners, Noble and GE Petrol, are expected to install the Abla B3 gas compression platform in 2015 for commercial operations to start in 2016.