If Jordan falls short of conventional oil and gas resources to sustain its economical development, it appears to hold the world fourth largest oil shale reserves after USA, China and Russia.

According to actual estimations, Jordan reserves of unconventional oil in the shale deposits could reach up to 90 to 100 billion of barrels.

In the same time Jordan energy consumption relies on oil and gas imports as well as heavy fuel and diesel.

According to the International Monetary Fund, these imports scaled up to $4.6 billion in 2011, representing 25% of Jordan’s GNP. 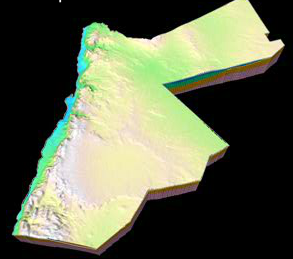 Without major changes, these numbers are likely to continue to grow driving the whole country to bigger economical challenges to finance these expenses.

In this context the opportunity to develop oil shale resources may be the solution in the same time as creating added value and jobs in the country.

After first tests in 2006, the Jordan Government signed a $500 million concession with Shell in 2009 to explore and develop oil shale in the country.

In respect with the size of the project Shell created a wholly owned subsidiary called Jordan Oil Shale Company (JOSCO).

Shell to deploy ICP technology at large scale in Jordan

Starting from nearly scratch, JOSCO is planning an exploration and development program with series of consecutive periods before running into commercial operations sometime later 2020.

The purpose is to assess Jordan oil shale reserves, where they are, and appraise them to evaluate their chemical structures to define optimize exploration and production conditions.

Oil shale may have different grains with different colors, from caramel to black, depending on the nature of the kerogen contained in the rock.

Kerogen is fossil combination of organic material that turns into crude oil and raw natural gas when heated and pressurized.

But as this rock has never been buried, thus submitted to long standing high temperature and pressure, it never completed its transformation into conventional oil and gas.

Instead this kerogen may be converted into synthetic crude oil through a pyrolysis chemical process to heat it up and generate a distillation reaction to produce some kind of bitumen and combustible hydrocarbon gas.

If the chemistry to transform the kerogen into oil and gas is easy in laboratory, it is a challenge to process it in the oil shale field itself. 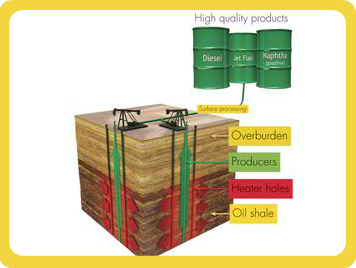 The In-situ Conversion Process is heating up the oil shale underground to create the pyrolyisis effect which will convert the oil shale into crude oil and hydrocarbon gas where it lies.

This crude oil and hydrocarbon gas can then be extracted with conventional methods.

Compared with conventional technologies where the oil shale is retorted on surface, the impact on the environment is minimized and production efficiency far better.

In addition the ICP technology can go deeper in the ground where the oil shale deposits are richer and thicker.

In parallel of Shell and JOSCO, Jordan awarded some other concessions to:

– Al Lajjun to Karak International Oil from the UK’s Jordan Energy and Mining Ltd (JEML) targeting to produce oil and gas from oil shale by 2015.

– Attarat Um Ghudran to Enefits from Estonia, with the support from Malaysian partners YTL Power International Berhad and Near East Investment to extract sufficient oil shale to supply two power plants of 230MW each in 2016 and produce 40,000 b/d oil by 2017.

With the help of major companies like Shell and JOSCO or through junior companies pioneering exploration and production unconventional techniques, the solution to reduce Jordan’s reliance on energy imports is now on the way with the development of the oil shale.