The Italian national oil company (NOC) Eni is currently proceeding to the pre-qualification of the engineering companies and shipyards to be invited to bid (ITB) for the front end engineering and design (FEED) of the first floating liquefied natural gas (FLNG) vessel to be moored in the Area-4 in the Strait of Mozambique on the East Coast of Africa.

Together with the Texas-based Anadarko Petroleum Corporation (Anadarko), Eni is leading the development of the huge reserves of gas discovered these last five years in the Rovuma Basin offshore Mozambique and Tanzania.

Anadarko is leading the exploration and production of the Rovuma Basin Area-1 while Eni is prospecting the Area-4.

In the Area-4, the working interests are more concentrated since Eni holds 50% shares of the joint venture with China National Petroleum Corporation (PetroChina or CNPC) (20%), Galp Energia (10%), Kogas (10%) and ENH (10%).

So far, Anadarko and Eni have identified more than 100 trillion cubic feet (tcf) and 70tcf in the Area-1 and Area-4 respectively.

With such reserves the Mozambique Government required Anadarko and Eni to unitize the development of the onshore part of their respective projects.

As a consequence, Anadarko and Eni have organized a competitive FEED to build series of 10 liquefied natural gas (LNG) trains at the Afungi LNG industrial Park to be developed in the Cabo Delgado Province in the north of Mozambique.

In addition to this first Afungi onshore LNG project, Eni is prospecting other locations upper north of Mozambique, close to the boarder with Tanzania, to install its own onshore facilities.

Anyway since the Australian experience, all the companies have experienced that building large onshore LNG facilities carries on number of uncertainties related to the local acceptance and the costs of such greenfield giant projects.

In this context, the risks associated to the innovative concept of FLNG look much more manageable for on-time deliveries. 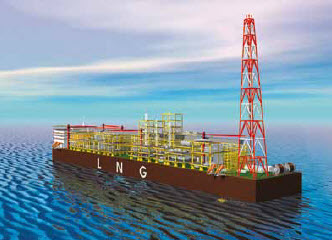 In order to design and build the first FLNG on fast track, Eni is planning to organize a competitive FEED based on the pre-FEED completed by the tandem Saipem – Hyundai Heavy Industries (HHI).

During the pre-qualification process, Eni invited interested engineering companies to team up with shipyards in order to present a complete offer combining both expertises.

From the four or five qualified tandems of engineering companies and shipyards, Eni should select only two to perform the FEED of the first FLNG.

Then the tandem returning best FEED conclusions and submitting the best technical and commercial offer for the engineering, procurement and construction (EPC) contract will be sanctioned the execution of the construction in following its FEED.

With this strategy, Eni and its partners , PetroChina, Galp Energia, Kogas and ENH, are expecting to offload the first shipment from the first Rovuma Basin Area-1 Mozambique FLNG by 2019.