According to the US Geological Survey, the Levantine basin in the Mediterranean Sea between Egypt and Turkey, and between Israel and Cyprus may hold up to:

The Leviathan natural gas field reserves represent approximately 100 years of the actual Israel consumption and will propel Israel as a major natural gas producer and net exporter in the Mediterranean region.

Within the Leviathan joint venture the working interests between the partners before Woodside were shared according to:

In taking 30% interests in the Leviathan joint venture, Woodside will pay to the partners $1.25 billion with the new shares of the working interests to end up at:

– Woodside 30% will become the operator of any LNG development.

– Delek Group 30% with its units Avner Oil and Gas LP and Delek Drilling LP dropping 7.67% each

Woodside and Noble to work on LNG pre-FEED

On early 2013, Israel will receive the first deliveries from the Tamar field, next to Leviathan, through a 700 million cf/g natural gas subsea pipeline that will already exceed the local consumption.

With the development of Leviathan, Israel is planning to export the gas, therefore to produce LNG for the transportation, likely to Europe.

Woodside, Noble and their partners Delek and Ratio Oil have initiated a pre-front end engineering and design (pre-FEED) for a LNG solution with Daewoo Shipbuilding & Marine Engineering (DSME) where all solutions will be investigated. 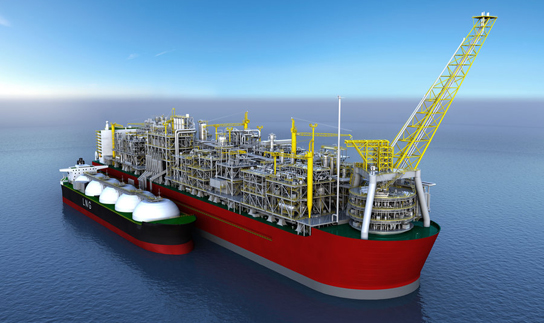 In Australia, Woodside benefits from the largest field of experiments for LNG projects where all the costs are running out of control because of the labor costs and lack of local resources to execute so many projects in the same time.

Best alternative appears to be the Floating LNG (FLNG) such as developed by Shell for Prelude as it skipped the costly subsea pipelines to shore and the onshore LNG plant.

In respect with the close relationships between Woodside and Shell, the FLNG may also be considered in Leviathan as it would also reduce significantly the work on site in this sensitive region.

In the meantime, Woodside, Noble, Delek Group and Ratio Oil are planning the first production of natural gas and LNG in 2016.