The pipelines business is concentrated on the:

– Alberta Ethane Gathering System, a wholly owned company to carry out pure ethane from oil and gas fields to petrochemical companies such as Nova Chemicals and Dow Chemicals in Alberta and Saskatchewan.

The midstream business is generated added value through:

– Aux Sable which owns and operates the North America largest extraction and fractionation facility near Chicago. Since 2011, Aux Sable acquired the Prairie Rose Pipeline and the Stanley Gas plant in the shale oil Bakken Basin, in North Dakota, linking Veresen into the booming business of shale gas transportation.

The Power business is comprising:

From its expertise in pipelines to transport natural gas and NGL and its acquisitions in midstream to fractionate and process the natural gas, Veresen had decided to move a step ahead into the liquefied natural gas (LNG) market with the Jordan Cove LNG project in Oregon, USA. 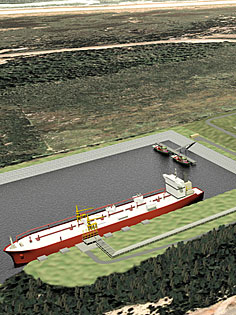 In parallel to its core busineses in pipeline, midstream and power, Veresen is planning its largest capital expenditure with projects in LNG, renewable energies and energy efficiency.

In LNG, Veresen is working on the conversion of its Jordan Cove LNG terminal into export LNG plant.

With 6 million t/y capacity, the Jordan Cove LNG project should be located in the Port of Coos Bay, in Oregon on the west coast of USA

The Jordan Cove LNG Trains should be supplied in natural gas by the Pacific Connector energy pipeline project.

Veresen is targeting the attractive Asian markets with the competitive shale gas prices in the USA.

For the renewable energies, Veresen plans to invest in two wind farms with the Grand Valley project and the St Columban project, both in Ontario.

Then Veresen is exploring new technologies with the waste heat recovery through the NRGreen company.

From these pilot cases, Veresen is building up experience before the expansion to all the other Alliance compression station that could improve the energy efficiency of the whole transportation network and cut its energy bill as well as the CO2 emissions.

As a junior energy company, Veresen is growing fast in focusing on its core businesses pipeline, midstream, power and in investing in opportunities to yield quick wins such as waster heat recovery and in new market such as windfarms and LNG with the Jordan Cove LNG project.