After Eni and Shell, which signed a production sharing agreement (PSA) respectively in June 2012 and January 2013, Chevron is reaching the final stage to close also a PSA with the State Government and Regional Councils of Lviv and Ivano-Frankivsk to explore and develop the Oleska shale gas field in Ukraine.

According to its PSA, Shell will invest $10 billion capital expenditure to turn into production the Yuzivska shale gas field located in eastern Ukraine. 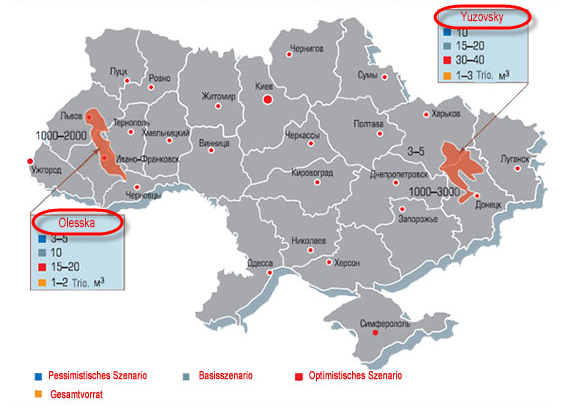 In the same way, Chevron is ready to go with a same scale shale gas project at Oleska in the west of Ukraine.

In accumulating shale projects of that magnitude with international oil companies (IOCs) such as Chevron, Shell and Eni, Ukraine is running to secure its gas independence between Russia, the exclusive source of supply, and Europe where stand the main consumers of energy.

On its side the Dixi Group reported estimations for the same in-place reserves between 175 tcf and 280 tcf of shale gas.

In both cases, these survey institutions are considering the recoverable reserves somewhere between 35 tcf and 45 tcf in respect with actual technologies available for this unconventional natural gas.

This Ukrainian shale gas is concentrated in two basins:

Dnieper-Donets is the larger basin with more than 75 tcf reserves of shale gas.

Lvov-Lublin is following with more than 50 tcf reserves.

With its Yuziska production sharing agreement, Shell got an area covering 7,886 square kilometers in the Dnieper-Donets Basin, while Chevron was awarded 6,324 square kilometers of the Oleska area in the Lvov-Lublin Basin. 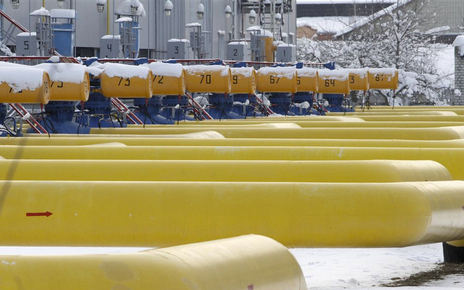 These two contract are signed for a 50 years period.

In a different scale, Eni is exploring in joint venture with Cadogan Petroleum Plc (Cardogan) from UK and the local Nak Nadra Ukrayny 3,800 square kilometers in the Lviv area as part of the Lvov-Lublin Basin.

Although Chevron had been awarded the Oleska shale gas field by auction together with Shell in May 2012, Chevron had to wait one year more because of disagreement on the way to share the revenues from the production sharing agreement between Kiev Government and Ivano-Frankivsk Regional Council.

In September 2013, an agreement could be settled by which the Ivano-Frankivsk Regional Council will perceive directly 10% of the production sharing agreement.

With these massive programs of capital expenditure planned by Eni, Shell and now Chevron, Ukraine expect to start production of the first shale gas in 2015 and to reach a plateau production of 200 to 380 billion cubic feet in 2030.

1 thought on “Ukraine in rush for gas independence with Chevron, Shell and Eni”