This Vancouver LNG project is one more evidence of Canada to take a leading role through British Columbia in the global gas market. 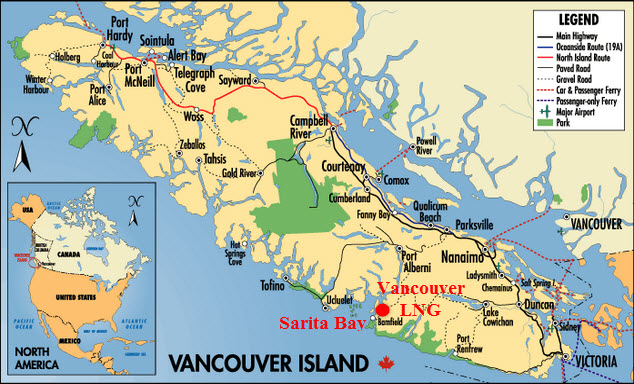 In November 2013, British Columbia Government published a report, the Ultimate Potential for Unconventional Petroleum from the Montney Formation of British Columbia and Alberta, where it updates the Province estimations of natural gas reserves.

After analyzing the Montney Basin in the northeast of British Columbia up to the boarder with Alberta, the B.C. Ministry of Natural Gas Development doubled compared with previous estimations the estimated gas -in-place reserves to 2,933 trillion cubic feet (tcf) of natural gas.

These reserves represent more than 150 years consumption out of which B.C. Authorities consider 1,965 tcf of natural gas are available reserves.

Because of its ideal position to export to Asia and its stable legal and political environment British Columbia is promoting its west coast to LNG projects investors.

In each LNG project proposed in British Columbia, the investors promote their competitive advantage to facilitate acceptance and speed up the approval process.

In the case of Steelhead LNG, the key value is the alliance with First Nations to build a very local B.C. project.

The selected site belongs to the Huu-ay-aht First Nations as well located 10 kilometers north of Anacla at the southern entry of the Alberni inlet on the Sarita Bay on the west coast of Vancouver Island.

Benefiting from such easy access location for LNG carriers, Steelhead LNG is planning to invest $30 billion capital expenditure together with HFN to develop this Vancouver LNG project.

In July 2014, Steelhead LNG submitted its application to the National Energy Board (NEB) for the export of 30 million tonnes per year (t/y) of LNG during 25 years.

In this perspective Steelhead LNG and HFN are planning to phase up the project with a first series of four LNG trains and a fifth one later on.

Vancouver LNG trains should have a capacity of 6 million t/y each.

In order to save carbon dioxide emissions these Vancouver LNG trains should be electrical motors driven.