The Royal Dutch Shell (Shell), and its partners, China National Petroleum Corporation (CNPC or PetroChina), Koreas gas Corporation (Kogas) and Mitsubishi Corporation (Mitsubishi) from Japan established a joint venture to design, built and operate the LNG Canada project to produce and export liquefied natural gas (LNG) out of Kitimat in British Columbia, on the West Coast of Canada.

Announced in 2011, LNG Canada is intending to lead the series of LNG export terminal projects maturing along the West Coast of Canada as the shortest route between the production fields in Alberta and British Columbia and the energy-thirsty markets in Asia.

In that respect, the alliance around Shell leadership of major companies representing China, Japan and South Korea did not happen by chance and gives the guaranty for prompt achievement of the LNG Canada project. 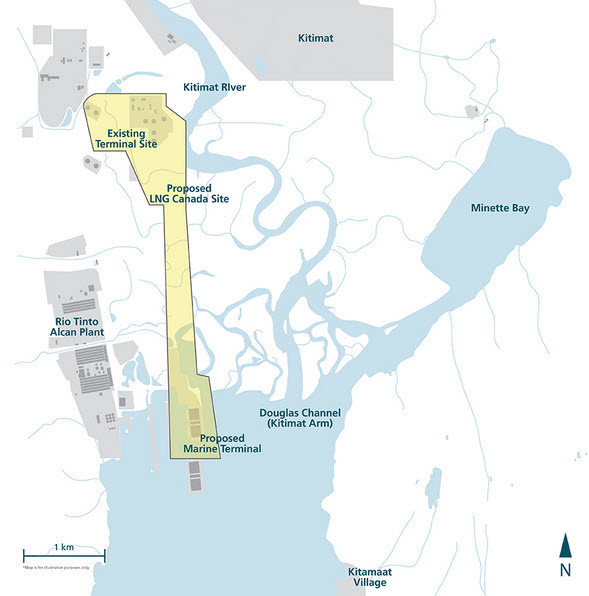 The LNG Canada project will be managed through the joint venture registered in Vancouver, BC, as LNG Canada Development Inc. (LNG Canada).

While establishing LNG Canada, Shell took the opportunity to increase its stake in the joint venture in buying 10% shares from Kogas and Mitsubishi.

After this operation, the working interests between the partners in LNG Canada end up as:

In LNG Canada the split of working interests between the partners will not have only a financial impact but also operational consequences as each company will have the supply gas to the LNG plant in proportion of its stake.

In practice it means that Shell, PetroChina, Kogas and Mitsubishi will have to secure long term gas supply agreement or take interests in gas exploration production in Western Canada at the level of their commitment in LNG Canada.

In 2012 LNG Canada signed a contract with TransCanada to build, own and operate the pipeline to supply LNG Canada in Kitimat.

In February 2013, Shell and its partners received a 25-year export licence approval from the Canada National Energy Board (NEB) for the LNG Canada project.

In February 2014, Shell, PetroChina, Kogas and Mitsubishi closed a deal with Rio Tinto to accommodate available land adjacent to its existing aluminium smelter along the Douglas Channel in Kitimat that could host the LNG Canada project.

In a first phase, the LNG Canada project should include:

In a second phase, Shell and its partners are planning to add two more LNG Trains in LNG Canada.

These LNG Trains should have each a capacity of 6 million tonnes per year (t/y) of LNG.

In choosing an existing industrial location along the Douglas Channel, Shell and its partners will minimize the capital expenditure for LNG Canada Phase-1 to $3.9 billion.

In reducing the preliminary work, Shell and its partners, PetroChina, Kogas and Mitsubishi are expecting to make the final investment decision (FID) in 2016 for first shipment to Asia by 2020.