The Saudi Farabi Petrochemical Company (Farabi or FPC) is planning to start the front end engineering and design (FEED) work on its Yanbu petrochemical project in the Western Province of Saudi Arabia.

Farabi was established in 2002 as a privately owned company.

Since 2006, Farabi is producing normal paraffin (NPN) and linear alkylbenzene (LAB) from its facilities located in Al-jubail Industrial City. 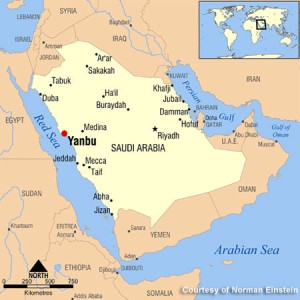 Focusing in these high added value petrochemical products, Farabi is supplying the domestic market and benefits from Port of Al-Jubail infrastructure to export NPN and LAB to other GCC countries, Europe and Asia.

LAB is one of the most important building block of the petrochemical and chemical industry as it is used to produced highly appreciated biodegradable detergents, emulsifiers, dispersants, wetting and foaming agents.

Since Saudi Arabia decided to reduce its reliance of oil and gas fluctuating prices in developing its downstream activities, local companies such as Farabi were encouraged to identify petrochemical specialties where the Kingdom could take a leading role.

In this perspective, Farabi decided to build up its competitive advantage from cheap local resources in NTN and LAB where it could maximize its added value on the global markets.

Farabi LAB and NTN project to be connected to Yanbu

In front of this ambition, the fact that oil and gas prices may remain at low levels for a longer than expected period is just pushing in favor of downstream activities where the gap between raw materials and transformed petrochemical products is boosting gross margins.

Therefore Farabi ambitions to become a world leader in LAB.

But the operating performances of a LAB facility is related to managing the right balance between LAB and NTN production that requires direct connection with a refinery to return surplus on by-products.

In that respect the selection of the location for a LAB project is critical as it has to be closed to a refinery and this refinery to offer the suitable capabilities to match with LAB – NTN production balance constraints.

But the Jizan Refinery and petrochemical integrated project had to cope already with its complex requirement, so that the feasibility of a Farabi LAB and NTN project in Jizan appeared less and less attractive.

Instead the Yanbu refinery was offering better compromise for such LAB and NTN project.

Located on the Red Sea approximately 1,000 kilometers north of Jizan, the Farabi LAB and NTN project in Yanbu will anyway contribute to develop the economy on the west side of the Kingdom.

Since Farabi completed the feasibility study and made the decision for the location of its project, it is planning to award the FEED contract for its greenfield LAB and NTN petrochemical complex on third quarter 2015.