The Dubai-based Qaiwan Global Energy DMCC (Qaiwan) Group has sent the call for bid (CFB) regarding the engineering, procurement and construction (EPC) contract for its Bazian Refinery Expansion Project Phase-3 (BREP3) in the Kurdistan Province of Iraq.

Qaiwan and Bezhan Petrochemical  Corporation (BezhanPet) operate in Bazian one of the two refineries in the Kurdistan Province.

Bazian is located 25 kilometers northwest from Sulaymaniyah in direction of Kirkuk at the southeast of Kurdistan.

With a capacity of 34,000 barrels per day (b/d) the Bazian Refinery is producing transportation fuels such as diesel, gasoline, kerosene, and feedstock for the petrochemical industry such as naphtha and fuel oil. 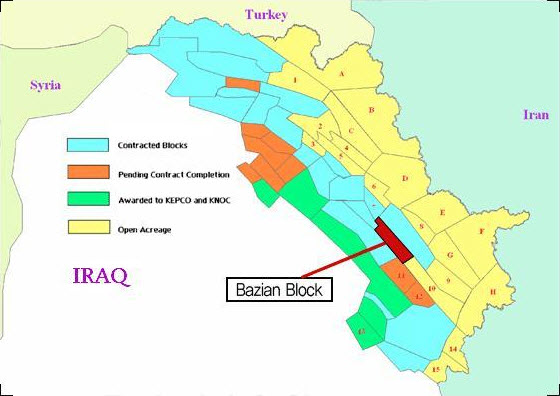 This first Bazian Refinery expansion project was completed in 2010.

In following Qaiwan engaged the second phase of Bazian Expansion to ramp up the refining capacities to 34,000 b/d.

Despite these refinery expansions, Kurdistan remains in deficit of refined products while it becomes a significant crude oil and gas exporter.

In this context, Erbil Regional Government and Qaiwan have decided to undertake the Bazian Refinery Expansion Project Phase-3 (BREP3) in selecting the French engineering company Technip to perform the feasibility study.

With the third expansion of the Bazian Refinery, Qaiwan is planning to add 50,000 b/d capacity to reach 84,000 b/d total.

The Bazian Refinery Expansion Project Phase-3 will also include the construction of a 110 kilometers inlet pipeline to transport the crude oil from the southern Kurdistan oil and gas fields to Bazian.

This pipeline will have a capacity of 125,000 b/d which indicates that Qaiwan is already considering 40,000 b/d expansion in further phases to come after BREP3.

In respect with the unbalance between the export of crude oil and the import of refined products, the Erbil Local Government awarded the front end engineering and design (FEED) work for the BREP3 to Technip.

According to the first conclusions of the ongoing FEED work in Technip, the Bazian Refinery Expansion Phase 3 should include:

In respect with the current progress of the FEED work carried out by Technip, Qaiwan expects to award the engineering, procurement and construction (EPC)contract for the Bazian Refinery Expansion Project Phase-3 on second half 2014 in targeting a completion of the BREP3 by 2017.