In 2012, Norway started to collect the first benefits of its exploration in the untapped oil and gas fields of the Norwegian Continental Shelf (NCS).

With the Geitungen discovery, the Johan Sverdrup is taking a new dimension motivating Statoil and its partners Maersk, Petoro, Det Norske Oljeselskap (DNO) and Lundin to redefine operatorship role.

In the same way, Edvard Grieg field, previously called Luno, appeared much larger than expected, obliging Lundin, the operator, to reshuffle its portfolio of assets to finance the $4.2 billion plan of development and operation on Edvard Grieg.

Total is moving ahead with another giant offshore development in Martin Linge.

All the good news area attracting new comers such as OMV from Austria and Wintershall, the BASF‘s oil and gas subsidiary.

In addition to the exploration and development of the new fields, Statoil is targeting to increase its recovery rate from the actual 50% to 60% in using the most advanced techniques of enhanced oil recovery (EOR).

In that respect Statoil has signed alliance with Wintershall to swap assets and test new solutions.

To reduce the costs of exploration, Statoil is also redesigning its drilling ships and creating new standards on Cat A vessels, Cat B, Cat C, and Cat D rigs, and Cat J jack-up.

In 2013, Norway should concentrate $37 billion capital expenditure in offshore greenfield projects mostly driven by Statoil, Lundin, Total, OMV and Wintershall with new projects such as Aasta Hansteen and Skruggard.

While Statoil and its partners, Maersk, Petoro, Det Norske Oljeselskap and Lundin, are running intensive discussions to develop the giant Johan Sverdrup fields, the Geitungen discovery confirms all the potential of the still unexplored  Utsira High areas within the Norwegian Continental Shelf (NCS).

Previously called Hild, the Martin Linge development belongs to Total E&P Norge AS (51%), the operator, Petoro AS (30%) and Statoil Petroleum AS (19%).

End of March, the Norwegian Government approved the development plan for the Martin Linge oil and gas field 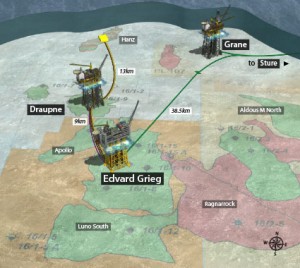 Lundin Petroleum received the formal approval from the Norwegian Ministry of Petroleum and Energy to proceed with the $4.2 billion plan development and operation (PDO) of theEdvard Grieg oil field.

The Edvard Grieg oil field was previously called  Luno and is located in the Norwegian North Sea close to the Tellus discoveries, 180 kilometers west of Stavanger, Norway.

Wintershall from Germany and Statoil from Norway signed an agreement to swap strategic assets in the North Sea and establish a cooperation framework on the enhanced oil recovery (EOR) technologies.

Home-based in Kassel, Germany, Wintershall is a BASF wholly-owned company operating upstream and midstream in the oil and natural gas trading, transportation and distribution in Germany. 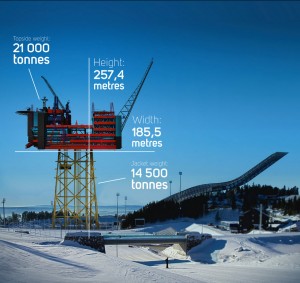 In October 2012, the Austrian-based OMV took over the 20% share held so far by the German RWE in the Edvard Grieg offshore project just after that Statoil had acquired 15% from Wintershall in the same project.

Previously called Luna, the Edvard Grieg project is led by the Swedish oil and gas company Lundin to develop the offshore oil and gas field located 180 kilometers west of Stavanger in the Norwegian Continental Shelf.