In May 2014, the Texas-based independent company Noble Energy Inc. (Noble) and the Australian national oil company (NOC) Woodside terminated their memorandum of understanding (MOU) regarding their potential cooperation in the development of the giant non-associated gas field Leviathan offshore Israel in the Mediterranean Sea.

This non-binding MOU had been signed in December 2012 in a context where Leviathan had popped-up in Noble assets as the biggest ever discovery, not even sure about its own technical and financial capabilities to develop such offshore gas fields as operator with local partners only.

This Leviathan gas field belongs to the Levantine Basin straddling in the Mediterranean Sea across Cyprus, Egypt, Israel and Turkey territorial waters.

Representing more than 100 years of consumption for Israel this unprecedented discovery required a couple of years to the Government to define its export regulation if any.

In this uncertain context, Noble and its local partners, Delek Drilling (Delek), Avner Oil Exploration (Avner) and Ratio Oil Exploration (Ratio) opened shared to Woodside in order to provide them with its expertise in large offshore gas field.

During this period, Noble and its partners explored all concepts to develop Leviathan from conventional floating, production, storage and offloading (FPSO) vessel to up-to-date floating liquefied natural gas (FLNG) vessel or combination of both.

The more Israel Government should have allowed export percentage from Leviathan, the more the FLNG solution and thus Woodside contribution were welcome.

In limiting the gas export to 40% of Israel production for now, the extra costs generated by Woodside-type FLNG concept are not paid back.

In addition some countries neighboring the Levantine Basin like Egypt and Turkey, accessible by conventional pipelines, emerged as interested customers for Leviathan gas reserves.

Therefore Noble and Woodside decided to terminate their MOU. 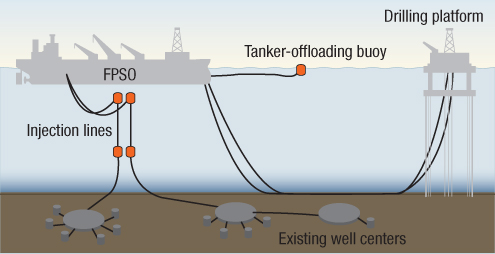 As a result the working interests in Leviathan remain as following:

In this new context, Noble and its partners have decided to phase Leviathan development in using conventional FPSO in the first phase and to consider a mid-size FLNG in a second phase.

The Leviathan FPSO should have a treatment capacity of 1.6 billion cubic feet per day (cf/d).

Then the FLNG should be sized in respect with actual gas availability for export.

To be implemented on fast track, Noble is planning to make the final investment decision on the Leviathan FPSO by the end of 2014 in expecting the first production by 2017.