With the main facilities in Point Lisa Industrial Estate in the natural gas-rich Trinidad and Tobago, MHTL ranks among the largest methanol producer in the world.

From its annual production of 4 million tonnes per year (t/y) MHTL is the first methanol supplier of methanol to its neighboring USA.

Even if Trinidad and Tobago is one of the most competitive country to produce methanol, the development of the US shale gas represents a potential threat to all importers.

As the largest importing company MHTL is more exposed than any other to any potential emerging competition, unless to lead the development of this domestic production.

In that respect the G2X Energy Big Lake Fuels project represents a unique opportunity for MHTL to expand its foot print in North America.

Since the profitability of the gas-to-liquids (GTL) facilities is based on the gap between the gas price on the supply side and the oil price on the demand side, the US represents one of the best opportunity to invest in this sector.

Even with a barrel price at $40 this process remains attractive when the gas price stabilize around $5 per million BTU.

Then with the agreement signed with G2X Energy, MHTL should purchase the entire methanol production from Big Lake Fuels to produce different grades of transportation gasoline. 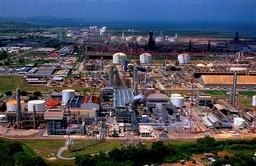 To be located close to gas pipelines connections, on the Calcasieu  Industrial Canal, the Big Lake Fuels facility will cover 200 acre.

In May 2014, G2X Energy received the air and construction permits from Louisiana Authorities.

On the marketing and distribution side, MHTL is partnering with the Southern Chemical Corporation (Southern Chemical) covering the western hemisphere in the sales of methanol and other chemicals.

Through the G2X Energy Big Lake Fuels methanol project agreement in Louisiana, MHTL will control the whole gas-to-liquids (GTL) value chain regardless the fluctuations of the crude oil price and shale gas price.