AP Moeller – Maersk (Maersk) and its partners in the Danish Underground Consortium (DUC), Shell, Nordsofonden and Chevron have decided to invest $800 million capital expenditure in a new offshore platform at the Tyra Southeast oil and gas field.

Located  approximately 200 kilometers offshore the west coast of Denmark in the North Sea, Tyra is part of the DUC scheme to develop the Danish oil and gas fields since 1972. After the first discovery of the Dan field followed by Gorm and Skjold, Maersk and its DUC partners developed Rolf in the west side and Tyra on the east side.

Over the years, Maersk and its partners deployed a complex of more than 30 platforms to support the wellheads and for processing the oil and gas before exporting them through 215 kilometers pipelines.

The oil and gas processing platforms are concentrated in Gorm and Tyra.

All these platforms are inter-connected through a subsea network of infield and transfer oil, gas and condensate pipelines giving the name of Danish Underground Consortium to the partnership between the operating companies.

In the Danish Underground Consortium, the working interests are shared between: With this DUC program, Denmark managed to stand self-sufficient in the oil and natural gas since 1991.

In its territorial water, Denmark still holds significant oil and gas reserves, but as most of the North Sea the fields are maturing and the production flattening unless additional investments should be made with new technologies to enhance the oil and gas recovery rate of the in-place reserves.

The expansion project in Tyra is part of DUC program to increase the oil and gas production in Denmark.

With Tyra Southeast, DUC should add 50 million barrels of oil equivalent (boe) to the Danish production over the next 30 years. 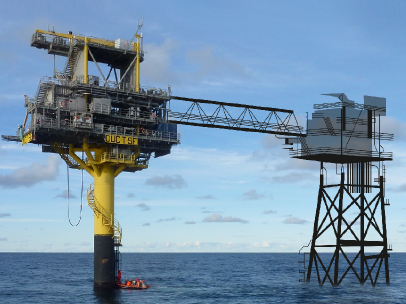 This production should be split between:

In this phase, Maersk and its DUC partners have planned to invest $800 million capital expenditure in the Tyra Southeast project.

This Tyra Southeast project includes a:

Bladt will design and build the jacket and the topsides  of the platform.

According to the term of the engineering, procurement and construction (EPC) contract, the Tyra Southeast platform should have a four legs jacket supporting 1.100 tonnes structure and topsides.

Bladt will build the Tyra southeast platform in its facilities of Aarlborg in Denmark.

As part of the enhanced oil recovery goal of this expansion project, Maersk and its partners have required Bladt to give priority to the energy and process efficiency in the design of the Tyra Southeast platform.

With Bladt to deliver the Tyra Southeast platform at the end of 2014, Maersk and its DUC partners, Shell, Nordsofonden and Chevron expect to start production in 2015 and to reach the peak of production of 20,000 boe/d in 2017.