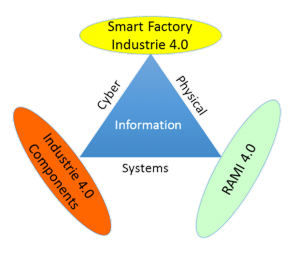 Industrie 4.0 is the name of the German Futur of Manufacturing Program, launched by Angela Merkel at Hannover Fair in 2014.
The objectives of this digital program are to maintain the position of the German Industry despite the competition of actors like China, and to strengthen their economy in light of the 2008 financial crisis. 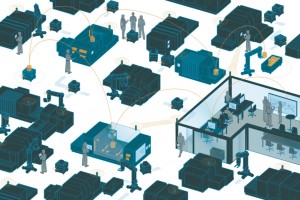 Called “Industrie 4.0” in reference of the fourth industrial revolution after the steam, the electricity and the robotization, Industrie 4.0 relies on the Cyber Physical System (CPS) to connect things together and to model a digital twin from a real object.

With this technology, the German industry expects to cut time and cost all along the value chain in gaining in flexibility against the countries looking for mass production.

Industrie 4.0 was the first digital program worldwide to revive the Industry and called number of other initiatives in manufacturing countries such as USA, China, France, Japan and South Korea.
But where Industrie 4.0 differs from others, is because it goes further than tax reduction and investment funds.
Under the leadership of trade associations (Bitkom, ZVEI, VDMA) Industrie 4.0 has been created with an architecture, communication protocols, standards to connect things from different sources and design in order to play collaborative. Named Reference Architecture Model Industrie 4.0 (RAMI 4.0), this open architecture uses administration shell as digital interface to connect things together.

Now, more than a program, Industrie 4.0 can be seen as an implementation methodology to boost the Industry productivity using digitalization to enhance the added value of data and IoT throughout the value chain.

Interested in the Industrie 4.0 world? Discover our solution Industrie 4.0 Smart Platform to play collaborative in the energy sector.