The Italian major company Eni and its partners, the Swiss trading company Vitol and the Ghana National Petroleum Company (GNPC), are working on the technical requirements of the floating production, storage and offloading (FPSO) vessel to be moored in the Offshore Cape Three Points (OCTP) Block to develop the Sankofa and Gye Nyame oil and gas fields offshore Ghana.

This Sankofa FPSO project is well supported by the Ghana Government not only because of the crude oil production but also due to the quantity of associated gas lying in OCTP Blocks reservoirs.

In water depth ranging between 50 meters and 1,400 meters, the Sankofa and Gye Nyame oil and gas fields contain recoverable reserves estimated to:

In the OCTP Block, Eni and its partners share the working interests in such as way as:

Focusing on the natural development the Ghana Government had synchronized in August 2012 to sign a Memorandum of Understanding (MOU) with Eni and Vitol for the development of the Sankofa Gye Nyame projects in the same time as it started the construction of the 110 kilometers gas pipeline from Atuabo on the coast to the Aboadze power plant in the north.

By this symbolic event, the Ghana Government was sending the signal to Eni and Vitol that the Sankofa FPSO should start operations on time to supply the Aboadze power plant.

BW, SBM and SBM in competition for Sankofa FPSO

Actually the Sankofa project has no chance to enter commercial operations on time with the pipeline, leading the Ghana Government to look for substitute source of supply including the import of liquefied natural gas (LNG) in the meantime that Ghana offshore gas fields come on stream.

In this context, Eni and its partners Vitol and GNPC are urged by the Ghana Government to speed up the development of the Sankofa and Gye Nyame oil and gas fields through the deployement of a FPSO in the Offshore Cape Three Points Blocks. 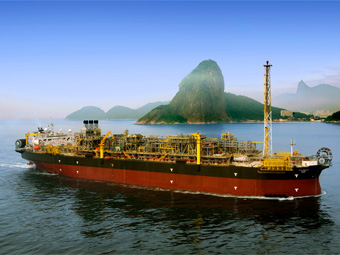 Originally thought to be developed as a non-associated gas to speed up the project, the gas prices and the crude oil reserves of the OCPT Block motivated the stake holders to opt for the FPSO concept.

Therefore the conceptual design of the FPSO is based on:

Based on these capacities at peak of production, Eni and its partners are working with BW Offshore, Modec and SBM offshore to evaluate the shortest route to convert an existing vessel into the corresponding Sankofa FPSO.

In this context, Eni and its partners, Vitol and GNPC, are targeting the Sankoafa Gye Nyame FPSO to load the first cargo of crude oil by 2016 and to export the first gas in 2017.