The GDF Suez Bonaparte is a $3.7 to $4.6 billion Floating LNG project to liquefied the natural gas from the Petrel, Tern and Frigate fields in the Bonaparte Basin, in the Timor Sea, 250 kilometres west of the northern Australian city of Darwin.

GDF Suez Bonaparte is a joint venture created in 2009 with shared interests between: 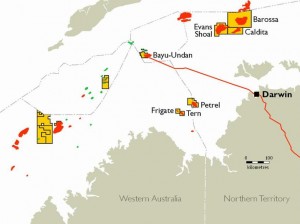 In January 2011, GDF SUEZ has awarded the contracts for pre‐Front End Engineering and Design (pre‐FEED) of the Bonaparte LNG project to:

– Granherne, a KBR company, for the upstream

– DORIS Engineering for the midstream

The project aims to produce between 2 and 3 million t/y of Liquefied Natural Gas (LNG).

From the pre‐FEED the FLNG should be 400 meters long and 70 meters wide.

In addition to the liquefaction units, the LNG trains, Bonaparte FLNG will also have the capability to produce, store and offload the condensates.

GDF Suez and Santos have also made the decsion to go for a purpose-built FLNG to be constructed in a shipyard of Asia Pacific.

The hull will be designed with a turret mooring system to remain connected  in bad weather and adjust position to streams.

GDF Suez and Santos have estimated the capital expenditure of Bonaparte FLNG between $3.7 and $4.6 billion depending on the final capacity to be decided during the FEED.

The gas will be supplied to the Floating LNG from the seabed through 22 sub-sea wellheads in water about 100 meter deep.

With Bonaparte FLNG being positioned above the Petrel field, the gas sub-sea gathering system will include a 60 km sub-sea gas pipeline to connect the Tern and Frigate fields to the vessel.

With Granherne and Doris pre‐FEED coming to completion, GDF Suez and Santos worked on the short list for the Front End Engineering and Design (FEED) and engineering, procurement and construction (EPC) contracts.

From the long list of candidates which had applied for the pre-qualification, the competition for the FEED should be concentrated between:

Each of these engineering companies will lead a consortium with a Korean contractors for the design of the hull and shipyard construction.

While bidding for the FEED contract, the engineering companies in competition will also have to submit a lump Sum Turn Key offer for the EPC contract.

If Shell has involved itself in every detail of its Prelude FLNG, GDF Suez and Santos have a different strategy and are planning to leave much more responsibility to the selected engineering company.

Therefore the winner between Chiyoda, McDermott, Saipem and Technip will have to assume it through this combination of  FEED contract and lump Sum Turn Key EPC contract.

It has build its experience over 3,000 projects in more than 20 countries.

DORIS Engineering are experts in the field of engineering for the offshore oil and gas industry.

Doris has accumulated more than 40 years of experience in the offshore industry, creating innovative and cost‐effective solutions for the most challenging environments, including remote locations.

Based in Paris, France, DORIS has offices in the UK, USA, Brazil, Indonesia and Angola

GDF SUEZ develops its businesses around a model based on responsible growth to take up today’s major energy and environmental challenges: meeting energy needs, ensuring the security of supply, fighting against climate change and maximizing the use of resources.

Headquarted in France GDF Suez is listed on the Brussels, Luxembourg and Paris stock exchanges.

An Australian energy pioneer since 1954, Santos is one of the country’s leading gas producers, supplying Australian and Asian customers.

Today, Santos is the largest producer of natural gas for the Australian domestic market.

Santos has developed major oil and liquids businesses in Australia and operates in all mainland Australian states and the Northern Territory.

It also has interests in Indonesia, Papua New Guinea, Vietnam, India, Bangladesh and the Kyrgyz Republic.

GDF Suez is planning to execute the FEED in 2013 in parallel of signing the commercial agreement for the LNG in order to make the final investment decision (FID) in 2014.

According to this planning, GDF Suez and Santos expects the Bonaparte FLNG for completion and start operation in 2018.