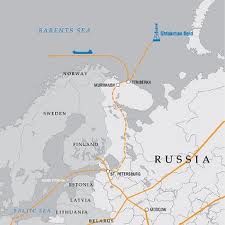 The foreseen capital expenditure for the Shtokman gas field development came up from first estimated $15 billion to $30-40 billion.

This costs escalation is resulting from multiple factors including the combined target to produce 50/50 natural gas and LNG.

This goal appeared to have a great impact on the costs due to the combination of the FPO with 550 km pipelines required for the gas treatment and transportation.

On the Onshore side the design and construction of  a LNG plant in the Zavalishina bay near Teriberka accumulated extra costs.

With reserves of natural gas among the largest in the world Gazprom, Total and Statoil could have afford these extra costs.

Since Shtockman FEED started in 2008, the unexpected speed of the exploration and production of shale gas in USA have affected directly or indirectly all the market gas prices in the different regions of the world.

On that period the USA turned from one of the biggest importer of gas to an exporter position with Henry Hub gas price below $2 per mmBTU.

Thus all the production of gas and especially of LNG in Middle-East Africa is re-routed to Europe or even better to Asia where the gas prices are indexed on crude oil prices based on local JCC contracts.

USA and Canada are also turning their pipelines projects and LNG terminals from import to export.

As a result, last week China and Russia could not agree on the natural gas trading prices and terminated their discussions to extend their gas pipelines connections.

In this context, Russia remains with large quantities of natural gas to marketize and to cover its own consumption giving little chance to Shtokman partners to finance their extra costs with natural gas.

Known reserves of natural gas in the Shtokman field are today among the largest in the world.

The geological reserves of the field are 3.8 trillion cubic meters of gas and around 53.3 million tonnes of gas condensate.

Can LNG save the Shokman project?

To rethink the project as 100% LNG would have several advantages:

– Reduce costs in simplifying the upstream and midstream part of the project, no pipeline anymore.

– LNG market prices are not as good as before but they are more sustainable than natural gas prices.

Anyway this option if proven profitable would suppose Gazprom, Total and Statoil to review their commercial terms as for instance only Gazprom is in charge of the marketization of the Shtokman gas.

The tax issue will also need to be clarified with the Russian Government.

The Final Investment Decision (FID) for the original design (LNG and Pipeline) is planned on July 1st, 2012.

At that date it is unlikely that the whole LNG solution will have been fully explored and accepted by all the partners.

If this date were postponed that would give a good sign from Gazprom, Total and Statoil to chose the full LNG solution which could then go for FID at the end of  2012.