In May 2014, ExxonMobil and its partners were loading the first LNG carrier with the first gas production from the PNG LNG project.

With a total capital expenditure of $19 billion, ExxonMobil PNG LNG project is the largest facility ever built in Papua New Guinea. 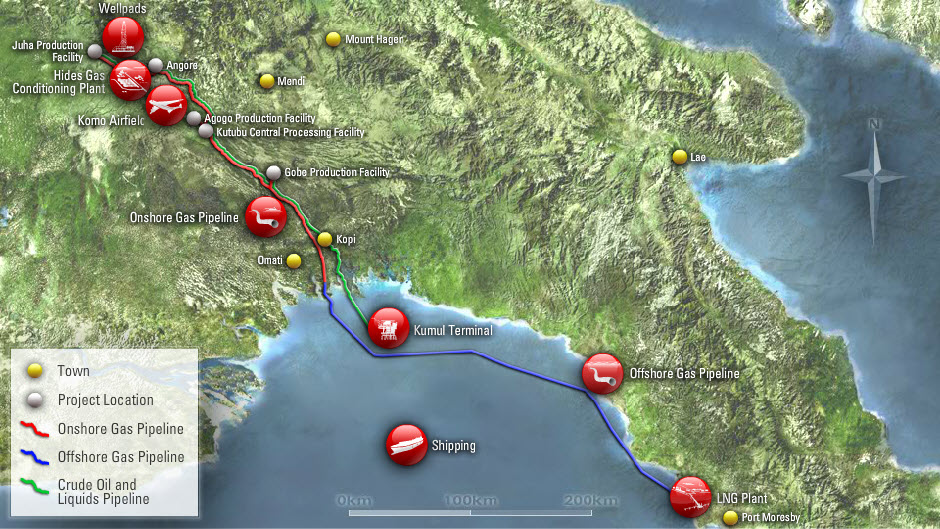 Because of the highly sensitive environment, ExxonMobil and its partner concentrated all the production facilities close to Port Moresby and deployed a gas gathering pipelines system of 700 kilometers to supply the LNG Trains.

In the PNG LNG project the working interests are shared between:

In respect with the project size and the ambition to produce more than 9 trillion cubic feet (tcf) of gas, ExxonMobil and its partners Oil Search, Santos, Nippon Oil, Mineral Resources and  Petromin decided to develop the PNG LNG Project in phases.

In the first phase of the PNG LNG Project, ExxonMobil constructed a two LNG Trains plant with a capacity of 6.9 million tonnes per year (t/y).

In addition to the LNG Trains and the pipeline system, the PNG LNG First Phase project also includes the:

Since ExxonMobil signed the commercial agreements for the export of gas with Chinese and Japanese companies, the volume of the two first LNG Trains is secured for the long term allowing to start working on the second phase of the PNG LNG Project.

In this perspective ExxonMobil had leased from the origin of the project a site at Caution Bay in the south of Papua New Guinea Central Province covering 2,600 hectares to support further expansion when needed.

As part of the MOU signed between partners and Papua New Guinea Government, ExxonMobil will be entitled to explore and develop additional resources from the P’nyang field and to build a pipeline to convey the produced gas to the PNG LNG Third LNG Train project.

With the P’nyang field appraisal to start in 2015, ExxonMobil and its partners Oil Search, Santos, Mineral Resources, Nippon Oil and Petromin are planning to make the final investment decision (FID) for the PNG LNG Third Train project in 2017 at the latest.