As the operator of the Azeri-Chirag-Gunashli (ACG) oil field in the Caspian Sea of Azerbaijan, Azerbaijan, BP shared with his partners, the State Oil Company of Azerbaijan (Socar), Inpex, Chevron, ExxonMobil, Statoil, TPAO, Itochu and ONGC Videsh, in the Azerbaijan International Operating Company (AIOC) his recommendations to maintain production up to 2024 and beyond.

Discovered in the 1980s by the Soviets approximately 100 kilometers east of Baku by less than 180 meters water depth in the Caspian Sea, the three crude oil fields Azeri, Chirag and Gunashli appeared quickly from first exploration to be as large as complex to develop.

But in 1994, the Government of Azerbaijan established the AIOC joint venture to sign a 30 years production sharing agreement (PSA) covering the development of the ACG oil and gas fields.

Led by BP, the AIOC joint venture consolidates the working interests of the stakeholders such as: 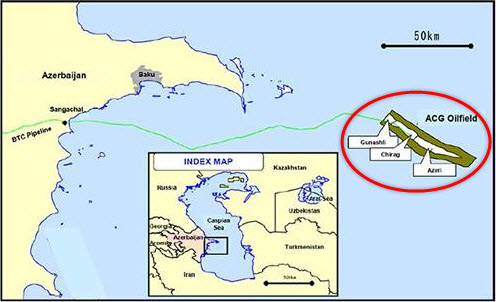 The AIOC production sharing agreement  is supposed to last until 2024, leaving the Government of Azerbaijan and its national flagship Socar to take the lead afterward.

In that perspective BP mobilized all its experience and knowledge about the ACG oil fields to figure out the potential scenari to continue their development beyond the production sharing agreement deadline.

With total reserves estimated to 17.4 billion barrels of oil, ACG ranks among the largest fields in the world.

At the end of the production sharing agreement, in 2024, BP estimates that only 5.4 billion barrels of oil will have been recovered, leaving still a long life to the ACG fields.

As the ACG oil field development provides the Azeri Government with the most significant revenues, it intends to prepare the next phase carefully to prevent any slowdown in production.

In that respect the last years experiences is rich of learning.

In completing the ACG Phase III project in 2008, the AIOC joint venture was expecting to reach 1 million barrels per day (b/d).

It should bring 100,000 b/d additional production of oil to the AIOC joint venture, shortly below the targeted 1 million b/d still.

From the modelizations tested by BP through digital oil fields techniques, it appears that solutions to prevent the early depletion of the ACG oil field should be to add two offshore production platforms to increase the pumping operations and gas injection capacities.

In order to maintain the ACG production at the level required by the production sharing agreement, the second platform should be in operation by 2021 at the very last limit.

Considering a minimum lead time of three to four years to design and build these platforms, BP and its partner in the AIOC joint venture Socar, Chevron, Inpex, Statoil, ExxonMobil, TPAO, Itochu and ONGC Videsh should make a decision to proceed with the first production platform before 2015.