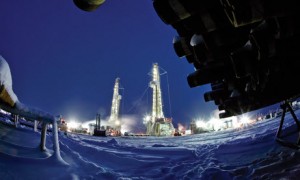 In addition the tests performed by Apache through three wells have reported that the shale gas of the Liard Basin is among “the best and highest quality shale gas reservoirs in North America“.

The Liard Basin is located approximately 150 km north of Forth Nelson, British Columbia.

The first well, the D-34-K, was drilled in 2009 and appeared immediately to be very prolific in producing 21 million cf/d during its first month.

This well requested only six fracks to release its natural gas instead of eighteen or more usually needed in the area.

During this testing period Apache managed to keep public attention off from its discovery and to acquire 174,000 hectares of land in that Liard Basin on the west side of the Horn River. 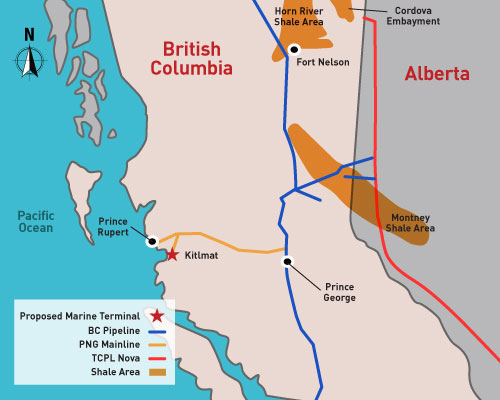 Apache estimates that the Liard Basin field may contain up to 210 trillion cf (tcf) of natural gas out of which 48 tcf may be extracted and monetized.

By way of comparison, all companies active in the Horn River Basin, have a total of marketable natural gas of 78 trillion cubic feet.

With 48 tcf, Apache would then own more than two-thirds the size of the entire Horn Basin.

The other two wells drilled since the first tests produced at the same level in quantity and quality as the first one.

Actually the natural gas from the Liard wells is already being sold by Apache through a pipeline connecting them to Fort Nelson.

Apache to convince Encana and EOR to double Kitimat LNG

A forth well is on going considering that each well in the shale gas Liard Basin costs $35 million capital expenditure until completion for natural gas production.

Despite this high cost, Apache made the calculation of a break-even price for the natural gas at the wellhead around $2.57 per thousand cf.

Thus the Liard Basin should be competitive compared with actual market conditions where natural gas is traded at $1.78 per thousand cf at the Alberta hub, below the U.S prices at $2.60 a thousand cf. 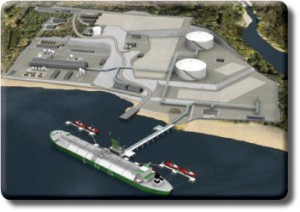 The find by Apache Corp., one of three partners with Encana and EOG Resources in the $4.5 billion Kitimat LNG terminal and pipeline proposal, is estimated to contain enough natural gas in itself to justify doubling the size of the Kitimat LNG terminal.

Apache and its partners plan a five-million-tonne-a-year LNG plant and export terminal in Kitimat which, if supply and demand warrant it, could be doubled to 10 million tonnes a year.

The Liard Basin alone could provide that additional five million tonnes of LNG for many years.

Considering that the LNG is contracted in Asia around $16 per thousand cf, Apache should not have too much difficulties to convince his partners, Encana and EOG Resources, to double capital expenditure in Kitimat LNG after the shale gas Liard Basin discovery.