The German chemical giant BASF SE (BASF) has selected its Freeport existing site on the Texas US Gulf Coast to build a greenfield Methane-To-Olefins (MTO) complex  based on the critical  methane-to-propylene (MTP)  conversion.

While the Bundestag, the German Parliament, continues to debate about the opportunity to allow or not fracking practices in Germany by 2018, its local chemical champion BASF has decided to cross Atlantic for its next gas-based chemical complex. 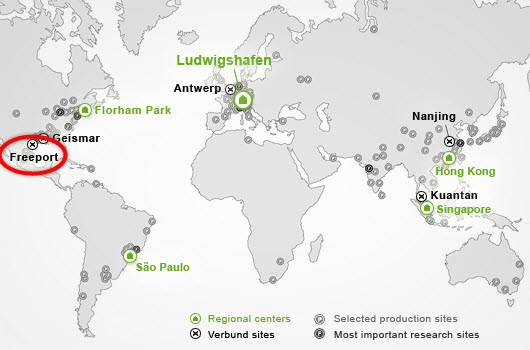 Year after year, Germany is getting more and more dependent from import of its energy despite its massive investments in the renewable energies.

In the current geopolitical context, this situation is rising more and more questions in Germany regarding the development of the shale gas despite the strong opposition of the green parties.

But at the scale a world leader willing to invest in a multi-billion project, this political uncertainty does not help, especially when some other countries like USA or now UK are putting in place more attractive regulations.

Despite its very low gas prices at the Henry Hub reference, USA is now proving to be able to increase gas production in sustainable and competitive conditions.

For one year now, we can see that the clearance allowed by the US Administration to export liquefied natural gas (LNG) out of USA has not affected the local prices and the competitive advantage given to the petrochemical industry through cheap feedstock.

In these conditions, the chemical companies do not see any reason for market changes anytime soon.

BASF Freeport site is very well located in Texas with easy access to the local pipeline system to receive gas and along the US Gulf Coast to export its petrochemical production.

Created in 1958, Freeport is a strategic facility in BASF organization with 25 production units in operations.

In 2014, BASF selected already its Freeport site to build a world-scale ammonia plant in joint venture with Yara International ASA (Yara) from Norway.

In 2015, BASF confirmed its strategy to go west in planning this Methane-To-Propylene complex.

Still at conceptual level this MTO project should produce 475,000 tons per year (t/y) of propylene.

Then this propylene should be the building block for an extended MTO complex with a large olefins product range downward.

Since USA is not only a large gas producer but also the first consumers market in the world, it offers to BASF the best scenario for value creation along the petrochemical transformation chain from the methane inlet pipelines to high added value petrochemical products shipments.

Ready to move into front end engineering and design (FEED) phase, BASF Freeport Methane-To-Propylene project should go through the final investment decision (FID) on mid-2016 for a first production in 2019, when Germany may start to drill first wells.