In order to optimize its $850 million capital expenditure, IPL selected an existing chemical complex in Waggaman, Louisiana, to develop its ammonia brownfield project.

Located along the Mississipi River on the industrial corridor, this new fertilizer facility will be integrated in the facilities of the Cornerstone Chemicals Company.

As a group, IPL is an Australian fertilizer company with operations in North America, South America and Asia.

Based in Melbourne in the Victoria State, Australia, IPL activities rely on two businesses:

– Nitrogen-based fertilizers, such as ammonia and urea under the name of Incitec Pivot Fertilizers

– Explosives for industrial purpose, also derivated from the same raw material as fertilizers, using the brand of Dyno Nobel.

In North America, Dyno Nobel is the market leader of industrial purpose explosives with already nine production units in operations.

The fast development of the emerging countries has generated these last years a surge for fundamental needs such food and minerals which have benefited to IPL businesses.

Because of its geographical position, Incitec Pivot Limited has historically access to India and China, the countries with the most numerous populations and the highest growth per year.

In order to take the best advantage of these opportunities, Incitec Pivot has decided to ramp up its production capacities in both activities, nitrogen-based fertilizers and industrial purpose explosives.

KBR PurifierTM to provide IPL with safety and reliability

In this perspective and considering that natural gas is the main feedstock to produce ammonia-based derivatives, it came as an evidence for IPL to consider the USA  and their glut of shale gas to build new production capacities.

Considering all the risks associated to the production or transformation of nitrogen-based chemical products, safety is the number priority for IPL businesses.

This primary target of safety begins with the selection of the location of a new plant. 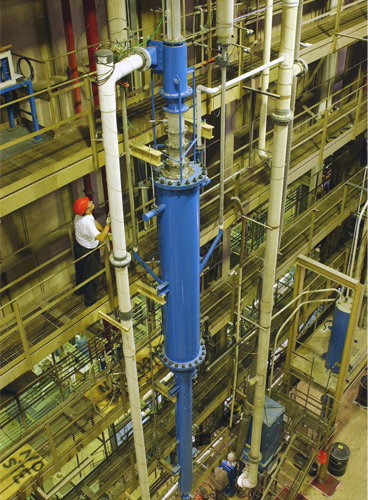 In going for a brownfield project in this existing chemical complex, IPL will benefit from the related infrastructures, including to handle ammonia, and skilled manpower able to work under tough safety standards.

In this context, IPL is planning to build its world-scale Louisiana project with a capacity of 800,000 t/y of ammonia.

From this amount, 300,000 t/y are already sold out for the local market with agreements with Transammonia Inc. and Cornerstone Chemicals Company.

From the $800 million capital expenditure of the project, $600 million will go to the engineering, procurement and construction (EPC) services contract awarded by IPL to the Houston-based engineering company KBR.

In addition to the EPC services contract, Incitec Pivot, licensed the KBR technology to design the ammonia plant.

For this Louisiana Fertilizer project, KBR will use its PurifiedTM process as it is recognized for its safety, reliability and energy efficiency.

On KBR side, the IPL decision consolidates its expertise and image in the petrochemical value chain issued from the local shale gas conversion.

With the design work beginning in following this agreement with KBR, Incitec Pivot Limited expects this Ammonia Louisiana Project to start commercial operations on second half 2016.