The international oil companies (IOCs) Total from France and Chevron from USA with their local partners PTTEP from Thailand and Myanmar Oil and Gas Enterprise (MOGE) are preparing the expansion of the Yadana gas field offshore Myanmar.

Located 60 kilometers from Myanmar coast line in the Andaman Sea, Yadana is one of the major natural gas fields in this country. 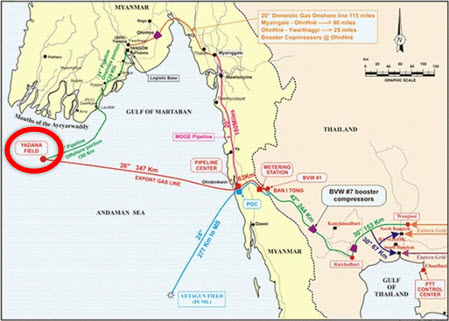 Most of the gas production is then exported through a 400 kilometers pipeline to the neighboring Thailand.

In investing $1 billion capital expenditure in this project between 1995 and 1998, Total and its partners were targeting 30 years production of natural gas.

Now the Yadana field is naturally maturing and is calling for new investments to maintain the production.

In Yadana, Total is sharing the working interests with its partners in such a way that:

With this set up, Total and its partners Chevron, PTT EP and MOGE are working on the Yadana Expansion project in adding a wellhead platform and a compression platform.

Total and its partners selected Technip to perform the front end engineering and design (FEED) work for the Yadana Expansion project.

Technip is due to complete its FEED work on first quarter 2014. 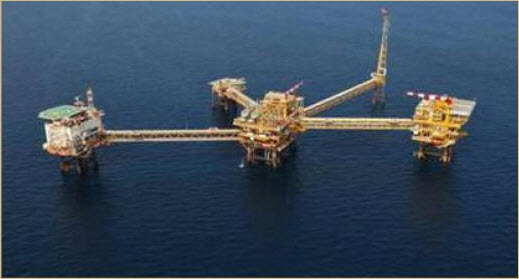 The wellheads platform should be large enough to host 9 slots.

The Yadana compression platform should have a capacity of 120 million cf/d of natural gas with topsides weighting between 4,000 and 5,000 tonnes.

This platform should be equipped for gas processing and water treatment.

It should be connected to the existing platforms by flowlines and cables.

Although Technip has not completed the FEED work, Total and its partners are considering to organize the call for tender of the engineering, procurement and construction contract (EPC) around two packages for the wellhead platforms and the gas compression platform.

In respect with the limited technical challenges of this project, Total and its partners qualified no less than 14 potential bidders with possibility for them to bid for only one package or both and to include the transportation and installation on site or not.

These bidders come from Asia, Europe and USA.

Based on this scenario, Total and its partners Chevron, PTTEP and MOGE are targeting to award the EPC contracts in following Technip FEED work on the first half 2014 in order to start production on early 2015.