Azerbaijan counts among Statoil‘s largest commitments in a single country outside of Norway.

Statoil started to to take interest in Azerbaijan in 1992 through the famous:

ACG is operated by BP where the working interests are shared between: 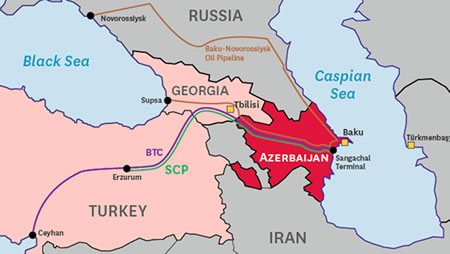 In Shah Deniz BP is also the operator while Statoil owns 25% stake.

Both companies are currently working on the development of the multi-billion Shah Deniz phase 2.

In parallel Statoil operates the Azerbaijan Gas Supply Company (AGSC) in charge of the marketing and sales of the of the Shah Deniz natural gas production.

Statoil is also running the operatorship of the South Caucasus Pipeline Company (SCPC).

The good progress achieved by Statoil, BP, SOCAR and the other partners in the ACG and Shah Deniz projects contributed these last years to a consistent development of the infrastructures in Azerbaijan with the support of the State Oil Fund of Azerbaijan (SOFAZ).

After the eratic campaigns of exploration and production from the Soviet period, SOCAR undertook to reduce the environmental impact of the oil and gas activities in Azerbaijan.

With the support of the World Bank, SOCAR has launched a program to capture and eliminate the flared gas in order to optimize the monetization of the natural gas and reduce the CO2 emissions.

Statoil assists SOCAR in this program in sharing its standards and good practices.

This technical and educational cooperation through the Baku’s Western University and the Environmental Laboratory is part of Statoil strategy to strengthen its presence in Azerbaijan for further oil and gas field developments such as the Umid gas discovery.

In July 2012, Statoil and SOCAR signed a joint study agreement (JSA) to explore the shallow water in the north of the Apsheron peninsula.

This agreement was to proceed to geological and geophysical exploratory work in this area in perspective for Statoil to take an operatorship role in upstream activities in Azerbaijan.

To detect the best opportunities in this area of the Caspian Sea, Statoil mobilized a team of exploration experts in its office in Baku, Azerbaijan.

Statoil is focusing on the  Umid, Babek and Mashal discoveries which appear as the second largest field in Azerbaijan after ACG.

Located 75 kilometers of Baku, 40 kilometers from the shore in the Azeri southern Caspian Sea area by 60 meters water depth and 6,000 meters total depth, Umid is expected to contain 200 billion cubic meters of gas and 40 million tonnes of condensate.

Nearby Umid, the reserves of the Babek field are estimated to 400 billion cubic meters of natural gas and 80 million tons of condensate.

Actually SOCAR is producing 1 million cf/d of gas and 200 t/d of condensate from Umid, but according to the preliminary studies Statoil and SOCAR are working on a development scenario of the Umid, Babek and Mashal fields as a cluster on the same model as used with BP on the Azer-Chirag-Gunashli (ACG) project.

So far Statoil invested $5 billion capital expenditure in Azerbaijan and is budgeting the same amount to develop the Umid-Babek-Mashal project.

Through this enlarged cooperation with SOCAR and in taking the operator role of the Umid-Babek-Mashal project in the Caspian Sea of Azerbaijan Statoil would take a leap in global production in the same time as SOCAR would benefit from most advanced offshore oil and gas exploration and production.