The super major Shell and its partners, the national oil companies Petronas from Malaysia and South Oil Company (SOC) from Iraq, are planning to invest up to $1 billion capital expenditure to double the production at the Majnoon oil field in the south of Iraq.

Shell and its partners has been awarded the technical services contract (TSC) on the Majnoon crude oil field in December 2009 during the second license round organized by Iraq Government to allocate the development of its national resources to foreign companies.

Discovered in 1975, Majnoon is one of the largest crude oil field in the world with 12.6 billion barrels of proven (1P) reserves and 38 billion of 3P reserves. 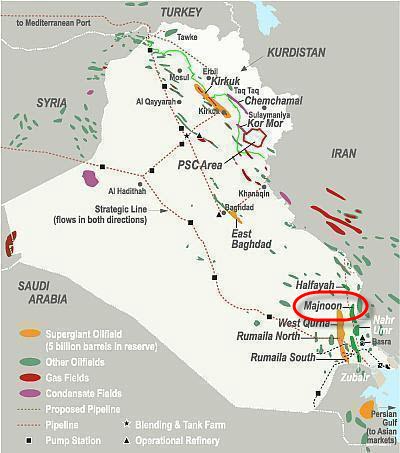 Unfortunately its geographical location at 70 kilometers north of Basra along the border with Iran transformed this oil-rich field into battle field in the 1980s and has been left abandoned since then with explosives and land mines all over.

When Shell and its partners Petronas and SOC were awarded the technical services contract by reverse auction, they conceded a remuneration fee of $1.39 per barrel and committed to ramp up the production by plateau year per year.

From this award, Shell and its partners share the working interests in the Majnoon oil field such as:

During the three years following the TSC sanction, Shell and its partners invested more than $2 billion capital expenditure including to clean up the whole battle field from the remaining explosives, land mines and any source of risks.

In parallel Shell built up the infrastructures to turn the field into production with: 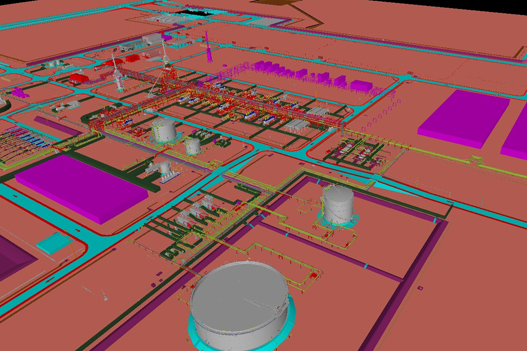 All these installations were due to start commercial operations at the end of 2012, but some delay in the construction, especially of the export pipeline have postponed the commissioning phase to mid 2013.

This export pipeline is connecting the Majnoon central processing facility to the Zubair/1 storage terminal to be shipped to global markets.

Along its 79 kilometers this pipeline generated tribal discussions and met some technical challenges causing the delay.

Earlier in May, Shell and its partners selected the joint venture Wood Group – CCC to provide field services during one year for the commissioning and start up of the Majnoon facilities.

Wood Group – CCC is a joint venture between The Wood Group from UK and the Athenes based Consolidated Contractors Company (CCC).

From this first level, Shell and its partners, Petronas and South Oil Company, are targeting to double output to 200,000 b/d.

To do so Shell announced to plan $1 billion additional capital expenditure to develop the Majnoon oil field.

Overall, Shell and its partners are planning to invest $50 billion over the next 20 years in Majnoon.

Anyway this decision comes in a context where other operators in the south of Iraq having signed similar technical services contracts have opened negotiations with the Iraq Government to revise downward the targeted production plateau.

After Eni, ExxonMobil and Lukoil, Shell and its partners, Petronas and South Oil Company are willing to benefit from the same flexibility on the Majnoon production targeted plateau to invest the next billion along the year.