SBM will supply, lease and operate a converted FPSO

The Fram field is located in United Kingdom continental Shelf (UKCS) including the Blocks 29/3c, 29/4c, 29/8a and 29/9c in the central North Sea, around 220 km east of Aberdeen, Scotland, UK, in a water depth of approximately 97 m.

These blocks are jointly owned by Shell and ExxonMobil with shared interest:

Shell will be the operator.

The Fram field is expected to produce during 25 years: 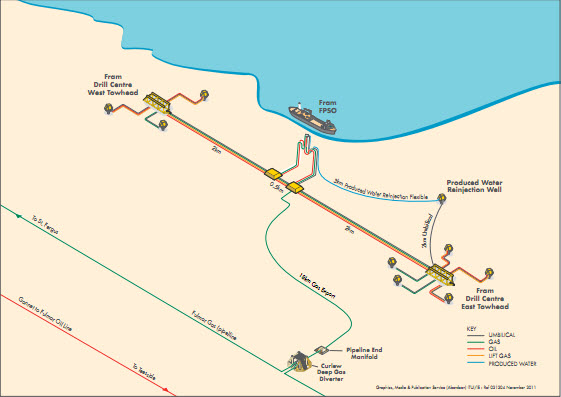 The Fram field will be developed via two sub-sea production well templates connected to a FPSO.

The FPSO will have facilities to treat the oil and gas production to export specifications.

The oil will be exported via shuttle tanker, and the natural gas via a new 18 km pipeline connected to the existing Fulmar Gas Pipeline to the St. Fergus Gas terminal.

The Fram Project will include:

– Two towhead manifolds (one at each drilling center)

The FPSO processing facilities will be designed to treat at peak:

Shell and SBM signed a Letter of Interim Award (LOIA)

In March 2012, Shell and SBM Offshore had signed  a first Enterprise Framework Agreement (EFA) for a period of five years with the option of further five years extension for the supply, lease and operate globally a medium size FPSO. 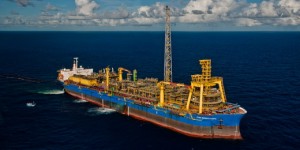 In June 2012, Shell and SBM signed a Letter of Interim Award (LOIA) to allow SBM to start engineering, procurement and construction (EPC) of the FPSO in the meantime of Shell and ExxonMobil to make the final investment decision (FID).

SBM is planning to develop the Fram FPSO on a converted Aframax type tanker.

This FPSO will incorporate:

– The oil and gad treatment facilities

– The oil and gas offloading system to the shuttle tankers for the oil and to the Fulmar gas pipeline for the natural gas.

SBM Offshore is a leader in floating production and mooring systems, in production operations and in terminals and services.

SBM pioneered the development of the FPSO, starting with supply of the mooring system for the first FPSO in 1976 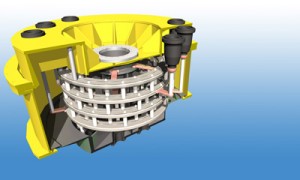 Since that time SBM has been involved in over 40 FPSO projects worldwide.

The leased production vessels currently includes 11 FPSO vessels in operation, with a further 3 under construction and 1 on standby.

With over 6,000 employees worldwide, SBM booked a record $ 16.9 billion orders in 2011 in a context where the demand for FPSOs will remain strong over the next few years.

To meet this growing demand SBM aligned seven new execution centers to ensure their full responsibility and accountability for their individual performance and for delivering improvements in project management and execution.

The increasing size and complexity of FPSOs underpins demand for SBM’s technical expertise  and strategic partnerships to help finance the continuing growth of the lease fleet, and to develop the local content component of FPSO projects.

Shell and ExxonMobil are targeting the SBM FPSO to be completed on the forth quarter, 2014 with oil and gas production to reach its peak in 2015 and then to deplete according to Hubbert’s bell curves.