SAGD is the acronym of Steam Assisted Gravity Drainage.

The Steam Assisted Gravity Drainage is a process to produce oil from tar-sands. 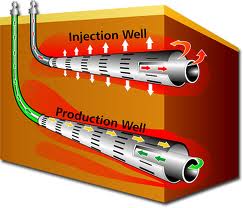 The SAGD process has been developed in Ontario, then in Alberta by Imperial Oil (ExxonMobil) in the years 1970s.

For years multiple experiments had been attempted to make this extra heavy crude oil technically recoverable, then economically viable.

The SAGD process is based on horizontal wells being drilled in parallel at a distance of 4 to 6 meters above each other.

In the upper well, the operating companies inject steam at high pressure which has the effect to make melting the oil contained in the sand.

In melting from the sand the extra heavy crude oil goes down in the ground and then is collected few meter below by the lower well.

This lower well is then pumping this melted oil up to the surface.

At this point the oil is mixed up with the sand dust and water coming from the steam condensation and present naturally in the Canadian underground.

During this operation, gas are released, especially methane and carbon dioxide, that need to be captured and treated.

SAGD depends on energy and water

If the concept of the SAGD process looks pretty simple, its implementation requires key elements: energy and water.

The SAGD process  needs massive quantity of energy to produce the steam.

Using the oil to generate this steam should be counter productive, so all alternative source of energy have been considered including solar, windmill and nuclear.

Nuclear has been quickly left aside, far before Fukushima disaster, because of the lack of water needed for the cooling while water is precisely the other critical resources needed to produce steam in quantity.

For instance the energy is developed from the fields of natural gas in Alberta and in British Columbia. 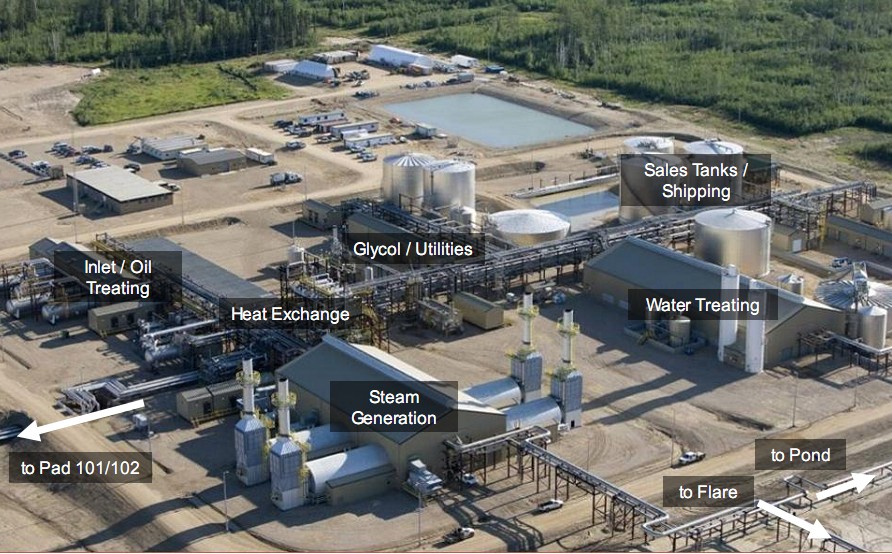 Regarding the water, all the SAGD facilities include large water re-cycling units in order to minimize the toll taken from the natural water reserves.

Between 2005 and 2010, the water consumption in the SAGD process has been divided by three.

From the early days of the SAGD in the 70s, the technology has improved significantly so that today, the recovery rate in some reservoirs may reach 70% or 80%.

At these early days the barrel price was fluctuating around $10 to $20 per barrel while the cost of the oil produced from SAGD was running around $80 per barrel.

But since then, both curves crossed each other where the oil price is now cruising around $100 per barrel and costs have been divided by two.

Technically and economically the SAGD is recognized as a viable solution as long as it also integrates all the environmental constraints.