Regasification is the physical process by which liquefied natural gas (LNG) is heated to be returned into its gaseous state.

The natural gas is liquefied to facilitate its transportation as its volume reduces by 600 times from its gaseous state.

To be liquefied, the natural gas needs to be cooled down to -161 degrees Celsius to condensate into a liquid which is colorless, odorless, non-corrosive and non-toxic.

It is then called liquefied natural gas (LNG) and characterized as a cryogenic liquid. 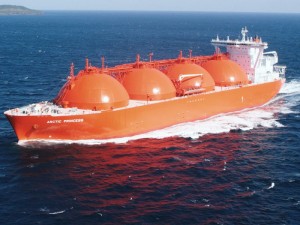 Once liquefied, the LNG may be easier to transport and store as long as it is maintained at this low temperature of -163°C as LNG undergoes a rapid transition to vapor especially if spilled on water.

Considering that the volume of the LNG instantly expands 600 times any default in the refrigeration or in the regasification process shall result in a physical explosion called Rapid Phase Transition (RPT).

The storage, transportation and regasification of LNG poses a hazard for structures and people potentially exposed.

This explosion does not involve combustion.

When LNG is spilled on water, heat is transferred from the water to the LNG.

This results in a rapid transformation of liquid to gas releasing a large amount of energy.

This risk is carefully considered in the design of the LNG carriers since most of the LNG is transported around the globe by dedicated vessels.

In pratice the regasification is performed in gradually warming the gas back up to a temperature of over 0°C.

It is done under high pressures of 60 to 100 bar, usually in a series of seawater percolation heat exchangers, the most energy efficient technique when water of the right quality is available.

An alternative method is to burn some of the natural gas to provide heat.

Once LNG carriers have berthed and offloaded their cargo into LNG import terminal, the liquefied natural gas is returned to cryogenic storage tanks, usually varying in capacity from 100,000 to 160,000 cubic meters, depending on the site, where it is kept at a temperature of -163°C prior to regasification.

On its way out of the LNG terminal through pipelines and distribution network, the natural gas undergoes any treatment processes needed to bring its specifications in line with regulatory and end user requirements.

Its heating value, for example, may be tweaked by altering nitrogen, butane or propane content or blending it with other gases.

These operations of liquefaction and regasification of LNG must not be confused with LPG.

The LPGs are liquefied petroleum gas, mostly propane, propylene, butane, or butylene which are liquefied by a simple compression at atmospheric temperature.

LPGs may be stored and transported in armored tanks at atmospheric temperature without additional refrigeration.

The LPGs regasification is proceeded smoothly just in decreasing the pressure when released from the reservoir for use.