CNPC and Total to double production with Halfaya-3

The China National Petroleum Corporation (CNPC or PetroChina) and its partners, Total from France, Petronas from Malaysia and the local South Oil Company (SOC) confirm to target the plateau production of the Halfaya oil field in the south of Iraq by 2017 as originally defined.

Halfaya oil field covers 300 square kilometers 35 kilometers east from the city of Amarah in the southeast of Iraq close to the border with Iran.

While the other major companies BP, Eni, Shell, Lukoil have managed to reset the level of plateau production of their respective operated oil fields with Baghdad Authorities, PetroChina and its partners maintain their production target of 535,000 barrels per day (b/d) as per the technical services contract  (TSC) awarded in 2009 at the second round. 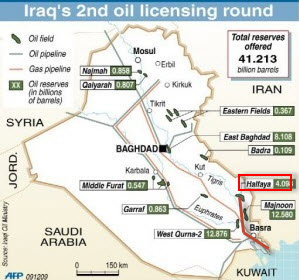 By these technical services contracts, Iraq Government leaves all the investments at the expenses of the companies and compensate them with a remuneration fee per barrel above a minimum level of production.

These minimum of production are specific to each field awarded and defined year per year in respect with a program to ramp the production up to the plateau production agreed between the companies and Iraq Authorities.

Halfaya was awarded in December 2009 with the technical services contract signed in 2010 including a remuneration fee of $1.40 per barrel.

Even though Halfaya is estimated to contain 4.1 billion barrels of crude oil reserves, with such low remuneration fee, the project of full field development remains a tough challenge for the investing companies.

For the other fields, the companies managed to revise downward the plateau production with Baghdad in justifying the lack of infrastructures to export the production.

Therefore they could review their plateau production in respect with Iraq capabilities to export it.

In the case of Halfaya, CNPC and its partners had planned to deploy export facilities in the same time as they could boost the production.

In July 2013, PetroChina awarded the engineering, procurement and construction (EPC) contract for the 272 kilometers pipeline project to connect the Halfaya, Buzurkan, Fuka and Abu Ghareb oil fields to the Al-Fao export terminal on the Persian Gulf.

In the same time, PetroChinaand its partners, sanctioned the EPC contract for Halfaya Phase-2 with no intention to slow down Halfaya full field development.

As operator, CNPC is sharing the working interests in the Halfaya project in such a way:

For the Chinese giant PetroChina, this Halfaya project is the largest asset overseas where it plays as operator. 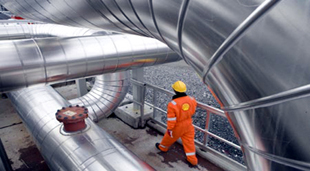 In this context, China and its flagship PetroChina cannot afford any delay and even less any downward revision of the production in Halfaya.

With the Halfaya export pipeline to be completed in 2014 and Halfaya central processing facility of the phase 2 due to run in 2015, PetroChina and its partners are planning to double the production from the current 100,000 b/d to 200,000 b/d.

For Halfaya Phase 3, PetroChina and its partners are planning to add:

– Series of clusters of 10 to 12 production wells each

With Halfaya Phase 3 still at design stage, PetroChina and its partner, SOC, Petronas and Total are targeting to more than double the production again in order to reach the 535,000 b/d plateau by 2017.