In parallel the Pakistan Government undertook an official visit in Qatar last week, in order to finalize the terms and conditions of a commercial agreement between the two countries for the supply of LNG from Qatar to Pakistan. 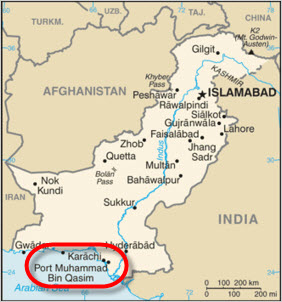 This Pakistan LNG project has been standing still on the drawing board for many years but the increase of gas consumption in the domestic market and the cold weather conditions of this winter have generate number of gas supply shortages these last months.

According to fast growing gap between the gas supply and demand the initial project to revamp  and upgrade the existing Progas LNG facilities has been shelved at the benefice of the greenfield Port Qasim LNG Import Terminal project.

Based in Karachi, the Sui Southern Gas Company is 70% owned by the Pakistan Government and operates on the midstream sector to supply Karachi with natural gas gathered from Sui in Balochistan an transported through a network of 3,220 kilometers of high pressure pipelines.

Established in 1997, Engro Vopak Terminal (EVLT) is a joint venture between the Pakistan conglomerate Engro Corporation Limited (Engro) and the Netherlands-based Royal Vopak (Vopak) company operating one of the world largest installed base of hydrocarbon products storage facilities.

This Port Qasim Terminal has already been subject to expansions so that it counts today 21 tanks with a capacity of 82,400 cubic meters.

After securing the gas supply from Qatar for a 20 years long term contract, Pakistan is willing to move on fast track to add the Pakistan LNG Import Terminal project along the existing Engro Vopak Port Qasim jetty and storage facilities.

The agreement between Qatar and Pakistan concerns the supply of 3.5 million tonnes per year (t/y) of LNG.

In a first phase Sui southern and Engro Vopak are planning to build an LNG terminal and regasification facility of 200 million cubic feet per day (cf/d) or 1.5 million t/y of LNG.

This Pakistan LNG first phase should be designed and executed on fast track as the first deliveries are expected in 2015.

For the second phase, SSGC and Engro Vopak should double the downloading and regasification capacities of the Pakistan LNG terminal.

To do so Engro Vopak is advising to expand the jetty in order to receive more vessels and larger LNG carriers.

This point is still subject to discussion with Sui Southern Gas Company and Pakistan Government as standing out of Engro Vopak actual scope of work of the Pakistan LNG Terminal project in Port Qasim.