SNC Lavalin from Canada and Stroytransgaz from Russia had been appointed respectively in 2011 and 2010 to provide consultation services and rehabilitation work studies to build two crude export pipelines and one gas pipeline through Syria. 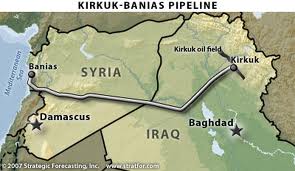 These pipelines should have a total capacity of 2.75 million b/d going through Syria to reach the Mediterranean Sea at the Port of Banias, Syria.

This export crude oil should be refined and loaded for shipment in Banias.

The first pipeline should carry out 1.5 million b/d of heavy crude oil from the northern Baiji area.

The second pipeline export 1.25 million b/d of crude oil from Haditha in northwest Iraq to Banias on Mediterranean Sea.

This second pipeline would follow the old route of the Haditha Banias section of the Kirkuk Banias pipeline damaged in 2003 during the second Iraq war.

These pipelines could be potentially connected to the southern fields  of Majnoon, Halfaya, Badra, Ahdab and East Baghdad.

This pipeline would have a capacity of 1 million b/d crude oil.

Being mostly used by the international oil companies (IOCs) operating in the south of Iraq under Technical Services Contracts (TSC), this Basra-Haditha pipeline should be awarded on engineering, procurement and construction (EPC) contract basis.

With SNC Lavalin working on the Iraq side and Stroytransgaz involved in the Syria side these export pipeline projects would help both countries:

These Iraq Syria Export pipelines projects were due to be tendered in 2013 on build-own-and-operate-transfer (BOOT) basis for completion on 2016.

From the SNC Lavalin and Stroytransgaz evaluations, the capital expenditure of the Syria export pipeline are estimated around $12 billion.

But the whole process of these export pipeline have now been put on hold because of the situation in Syria with no end in short term perspective.

In the meantime Iraq is highly dependent on the southern Basra export pipeline expansion with the Iraq Crude Oil Export Expansion Project (ICOEEP) leading to the Fao Terminal on the Persian Gulf.

The Iraq Government is also negotiating with Saudi Arabia to re-open the Yanbu pipeline which had costed $2 billion to Iraq for a capacity of 1.6 million b/d of crude oil, but was closed by Saudi Arabia in 1991 after the first Iraq war.

As these discussions between Iraq and Saudi Arabia may also take some time for resolution, Iraq is considering a new route for its export pipelines across Jordan.

Actually Iraq is already exporting oil through Jordan but by trucks transportation with a capacity limited to 10,000 b/d.

In the past the Jordan export route had already been explored but dropped in favor of Syria offering more capacity at lower costs.

Through Aqaba in Jordan, Iraq could export 1 million b/d representing only one third of the Syrian solution.

The export to Europe and USA would require smaller tankers as to cross the Suez Canal to join the Mediterranean Sea.

In opposite way, Aqaba is more convenient than Syria to export to Asia across the Read Sea.

With limited accesses to the seas and still political issues pending with most of its neighboring countries Iran, Saudi Arabia, Syria and Turkey, Iraq must explore all the possible routes to build export pipelines and cannot afford to depend on a few.

Therefore the Iraq export pipeline to Aqaba on the Red Sea through Jordan becomes a secured and valuable option.