On May 30th 2013, the German-based E.ON signed an agreement with the French GDF-Suez to take 25% stake in the Austen discovery in the Central UK North Sea.

Until then, GDF-Suez was the solely owner of the working interests in Austen.

After the transaction, GDF-Suez will hold 75% working interests and the operator role in the project development.

The signed agreement will ent 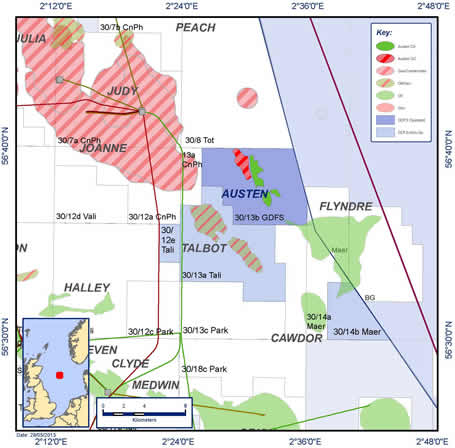 er in force only after the approval of the UK Authorities through the Department of Energy and Climate Change (DECC).

The Austen discovery was previously named Jacqui and belongs to the Blocks 30/13b under the license P.1823.

GDF-Suez had been sanctioned the License P. 1823 during the 26th Offshore License Round organized by UK in 2011.

To win this License, GDF-Suez made a special effort as the Block 30/13B were located the promising East Central Graben area in the Central UK North Sea. 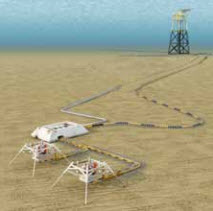 The exploratory wells were supported by appraisal drilling operations which confirmed two crude oil discoveries and one liquids-rich gas field.

In addition this first campaign indicated the presence of potential upside reserves in unappraised layers.

Together with the Cygnus gas field, shared with Centrica Energy and Bayerngas, and already at development stage, Austen has become one of GDF-Suez major asset in the UK North Sea.

In this context, GDF-Suez made the decision to open the working interests to financial and commercial partner, such as E.ON, in order to speed up the development of its Austen acquisition.

On June 5th 2013, GDF-Suez selected the tandem Xodus Group (Xodus) and Atkins to perform the conceptual study for the development of Austen.

Based in Houston, Texas, Xodus owns offices in Aberdeen and London, UK.

Xodus partner in the contract, Atkins, is well known in large and complex infrastructure projects for thes energy and transportation sectors with headoffice in UK.

In this respect, Xodus and Atkins associate their respective competence in subsea and infrastructure to win the bid organized by GDF-Suez for this conceptual study tender.

The fact is that by this contract, Xodus and Atkins are due to explore the different options to:

– Envisage the most efficient ways out to export these gas and liquids from Austen considering the existing infrastructures of pipelines and terminals within the Central UK North Sea.

To execute this conceptual study contract Xodus and Atkins will concentrate their engineering activities in their respective office of Aberdeen, UK.

According to the terms of the contract, Xodus and Atkins are expected to return their recommendations for the development and export concepts of the oil and gas and condensate from the Austen field to GDF-Suez on the first quarter 2014.